Republic Day usually revolves around watching the military parade live or on television. This time why not take a week off and explore the cyber city–Bangalore. Apart from being technologically advanced and having numerous startups there are plenty of fun and exciting things to do and experience. From rock climbing, trekking, wall climbing, caving, camping and even wildlife safaris, this is place where adventure and surprises never cease to stop. So, what are waiting for, book those tickets, pack your bags and get ready for some unforgettable memories. 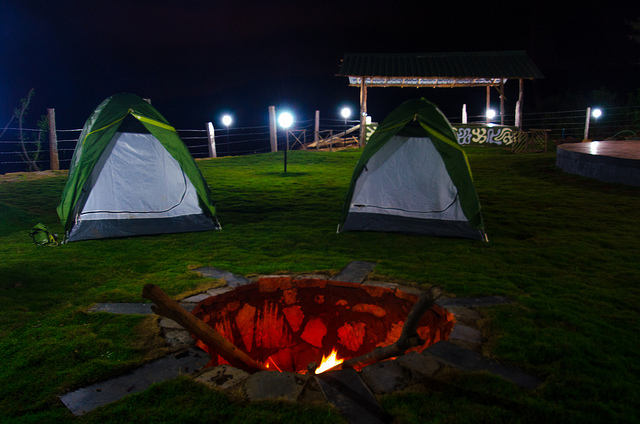 Located at a brief expanse of 50 kms from Bangalore, the Nature Adventure Camp at Kanakpura is home to the exquisite lake of Hosadoddi. A stone’s throw away from the Forest estate of Bananthimari, this pristine camping experience offers you a wide range of experiences ranging from trekking to historical exploration to spotting the bountiful excitement of wildlife. The overnight camping at Kanakapura only makes the experience etheral! Pitch your own tent for the night, encouraged by able instructors, and have fun with outdoor games. A sumptuous dinner served later and the campfire with foot-tapping music will sweeten the evening. Retreat into your tents and spend the night under the stars. 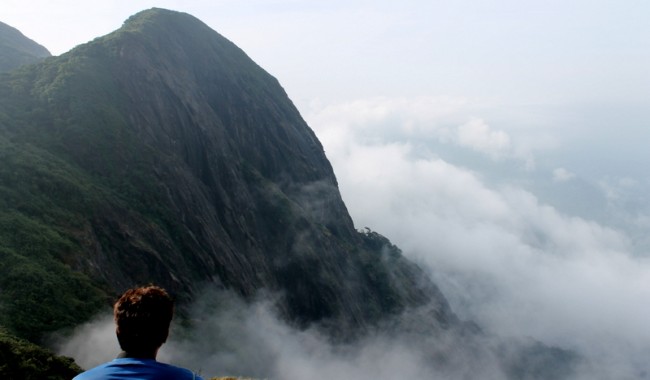 Pushpagiri or Kumara Parvatha, at 1,712 metres  is the highest peak in Pushpagiri Wildlife Sanctuary in the Western Ghats of Karnataka. It is located in the Somwarpet Taluk, 20 kilometres  from Somwarpet in the northern part of Kodagu district on the border between Dakshina Kannada and Kodagu districts. It is 6th highest peak of Karnataka. About 36 kilometres (22 mi) from Somwarpet and 1.5 km (0.93 mi) from Kumaralli, it is located amid the jungle. Trekking can be done from the base, Bhagati, which is a 10 km, three-hour walk. Otherwise, trekkers can cross Kukke Subramanya, located in Dakshina Kannada district of Pushpagiri Range. The trekking zone can be approached from Pushpagiri or from Kumaraparvata peaks. Kumara Parvatha trekking path leading to the peak is completely covered by the evergreen forests coming under Sulya forest belt, with different trek routes, we have 2 different routes to explore and conquer the peak. 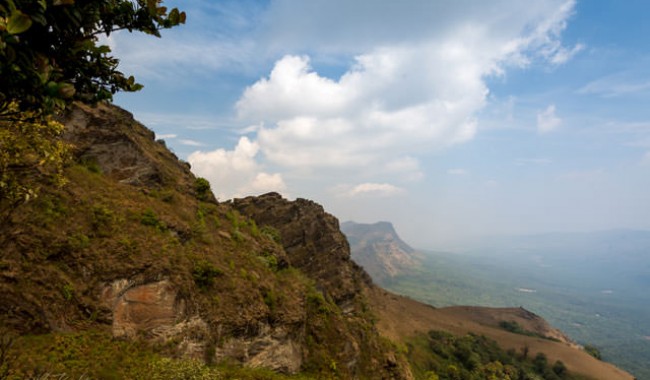 Savandurga is a hill 60 km west of Bangalore off the Magadi road, in India. The hill is considered to be among the largest monolith hills in Asia. The hill rises to 1226 m above mean sea level and forms a part of the Deccan plateau. It consists of peninsular gneiss, granites, basic dykes and late rites. The Arkavathi river passes nearby through the Thippagondanahalli reservoir and on towards Manchanabele dam. The Savandurga hills are frequented by pilgrims who come to visit the Savandi Veerabhadreshwara Swamy and Narasimha Swamy temple sited at the foothills. Picnickers come to spend time among the serene environs of the hill. Rock climbers, cave explorers and adventurers are among others who frequent the locale. Manchanabele Dam is a great place for water sports. 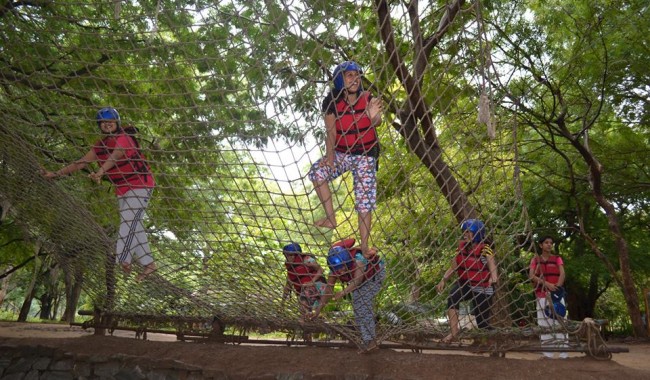 Located on the banks of the River Cauvery and on the edges of the Mutati forest range is the Jungle Lodges of Bheemeshwari. Around 100 km from Bangalore, it serves as a retreat for those looking for a calm and refreshing one day outing. Enjoying the quaint surroundings, whisk up your schedule with a dash of adventure. You can relax on the banks of the Cauvery and bask in the sun, or choose from the various adventurous activities such as Zip-Line, Burma Loops, Parallel Walk, Cat Walk, Elephant Walk, Rappelling, Kayaking (depends on water level) and Coracle Ride. This places lies in core region of forest area of Kaveri/Cauvery Wildlife Sanctuary home to many species of animals and birds. The main attraction of the forest here are the Joint Malabar Squirrel, one spot if lucky and also there are many other species present here like Tigers, leopards’, rare sighting of the samba’s herds of Elephants and also many aquatic creatures like the marsh Crocodiles to Mahseeer’s alongside this you can spot up to 200 species of birds in the dense forests. 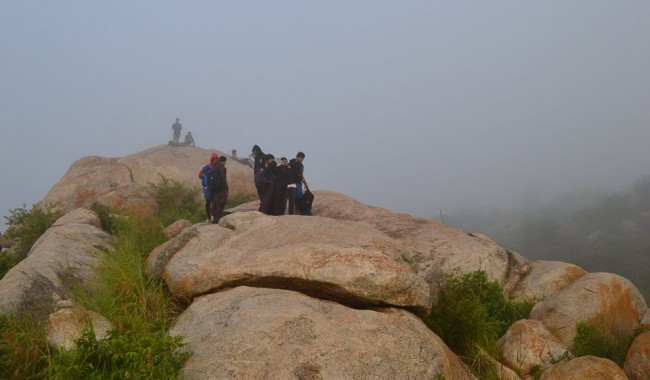 Anthargange is situated near the city of Bangalore. The rocky hills serve as a haven for trekkers and adventurous travelers. The Anthargange range is situated in the district of Kolar in Karnataka and is 70 kms from Bangalore. The main tourist attractions include the volcanic rock formations and its numerous cave systems. There are numerous caves and rocky that keeps the travelers busy with exploration. There are also a few temples and religious sites. The name Anthargange also refers to a perennial spring that is found near the Kashi Vishweshwara temple on the hilly range. The hilly range is a haven for trekkers and adventure seekers. Anthargange is a unique hill that is covered by a blanket of dense forest at the base. However, as one moves up the rocky hill the greenery thins out and is finally replaced by some thorny bushes that adorn the top of the hill. 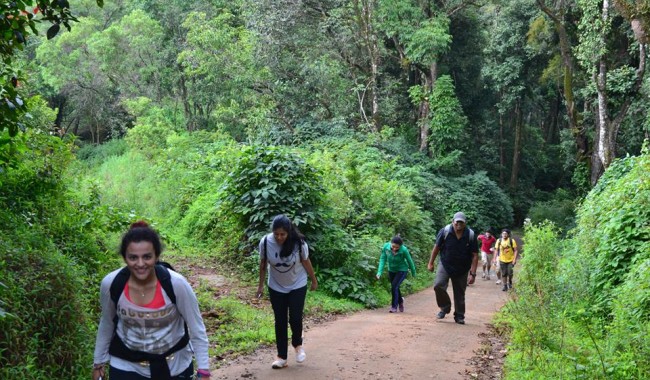 Tadiandamol is the highest mountain of Kodagu district, Karnataka, India. It is the third highest peak in Karnataka. It is located Western Ghats range, and reaches an elevation of 1,748 m. The mountain has patches of shola forests in the valleys. The Nalaknad palace at the foothills is an important historical landmark. This was one of the landmarks mapped during the Great Trigonometric Survey.  It is a place of interest for trekkers and naturalists. The climb to the top and back can be completed as a day hike; but it is also a good location for overnight camping. Tadiandamol trek is one of the most beautiful, though less known, treks in Karnataka. The trail takes you through the vast expanse of the Shola forests, through endless lush green grasslands and streams. It is a day trek which makes it even more doable for city folks- whether avid trekkers or beginners.