The city of dreams is always known for its fast life. But the city holds more than just its traffic and crowded local trains. Mumbai, which runs at the speed of light is a beholder of equally pleasant nightlife. The roads which scream of vehicles, noise and people, is peaceful and soothing in the night. Witnessing this side of Mumbai is a bliss and it’s more special to live those moments by riding a cycle across the streets. To make this happen, there are often midnight cycling events organized. And so you need not worry about safety, route, freshers, renting the cycles, etc.

While there are several routes to explore the shades of the city, one of the best ones is to ride through the coastal route. With silence in the air, riding your cycle on the land’s street light, accompanied by the breeze of water and waves makes you forget about all  your problems.

The 35 km ride is filled with surprises. The icebreaker lets you stroll through the queen’s necklace in a starry night and socialize with new pals.

While riding, you first land up at the jewel of the city that is Marine Drive and Girgaon Chawpathy. This place has its own charm. And witnessing it in the night, being all by your own is a moment you cherish forever. Riding alongside with the reflection of moon on the water, pitch dark sky, and golden jewel like light is calming.

With this kind of freedom which otherwise would not be possible, one can live to the fullest (but obviously keeping the rules in mind). And it’s safe because the Mumbai Police is active at the nights. They have their vans deported after several distances.

The great thing about the event is that it isn’t much exhausting as there are such timely halts. This adds up in making the journey more smooth and relaxing.

What’s more interesting to the ride is the chaiwalas on their cycle. The taste of their boast drink and bunmaska at such an hour is enough to beat even a luxurious breakfast. And don’t miss their story tales which have travelled miles.

The difficulty comes while riding further towards Haji Ali and Dadar. It’s a long stretch of steep road, but it’s more like a fun challenge to ride through it. And as you cross the Haji Ali and pass through the lanes of Dadar, you sense the kind of peace the place has. The same place which is the busiest during the day. 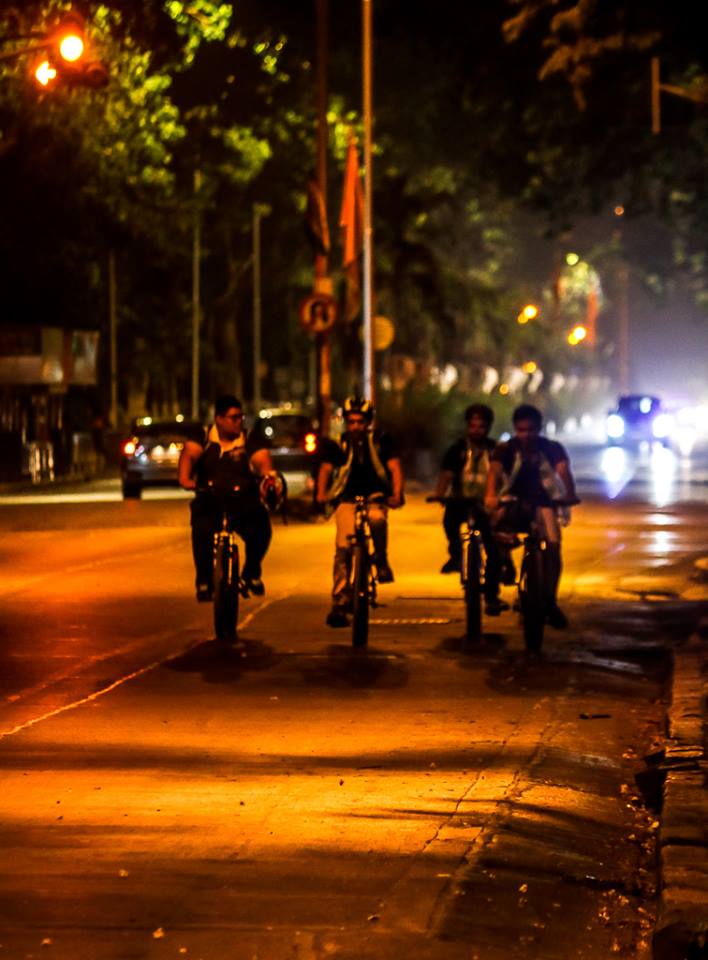 By this time, you have past the midnight hour. And riding by, you reach the ever stunning Worli Sea Face. Not to forget the night tapris who are there to satisfy your food cravings.

The next stop is the Mahim Dargah. While you might have seen the place during the daytime, the midnight atmosphere of this old Dargah is something one must see.

And just like in no time, the night would pass like a blink of an eye as you ride to the last place that is the Bandra Bandstand. It’s probably the time of dawn. Finishing the ride across the city at the Bandstand, with memories of the night in the heart, and waiting to witness the sky chance its shade in the city which is always on a move.

If you have never pedalled a cycle, don’t sign up for the event.