‘I asked my soul: What is Delhi?

She replied: The world is the body and Delhi its life.’

Housing history spamming thousands of years, the capital of India has been the ground for the dreamers. Battles fought, stupendous buildings erected, and delicious food made, Delhi is truly the place for the wild hearted ones, who never stop chasing their dreams. Here, in its nooks and crannies hide stories of people whose soul has become a part of Delhi; the consuming love Delhi offers, with arms wide open, is unquestionable. This is the land with alleys of mullahs and confectionaries. The beauty of Delhi has persisted over the years, kept alive by romantics and visionaries, who lived in awe of Delhi. Here’s revealing a bit of Delhi’s magic! 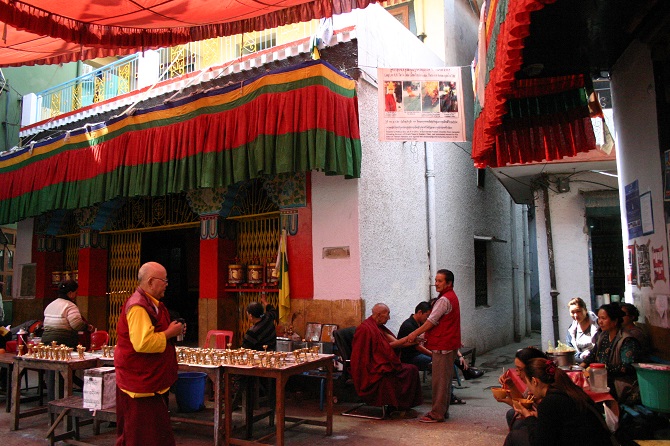 Majnu ka Tilla (Or MKT in college lingo), a Tibetan colony in North Campus, is known primarily for its Gurudwara located on the bank of the Yamuna River – the stuff of a famous legend. Narrow lanes which seem to twist endlessly, are peppered with bits of Tibetan culture. With divine food and a hotspot for Western clothes, MKT is the favorite of North Campus students. Moreover, the alleys are lined with smaller shops selling everything from “free Tibet’ merchandise to delicious street food. MKT is a paradise buried away in a corner of Delhi.

Qudsia begum’s home, complete with lush gardens and a fountain lays in ruins almost 300 years later after it was built. The architecture is breathtaking, the gateways with large arches of carved sandstone and long verandahs, are airy and peaceful. The mosque nearby also exists in broken down parts, but nevertheless its structure is highly imposing. 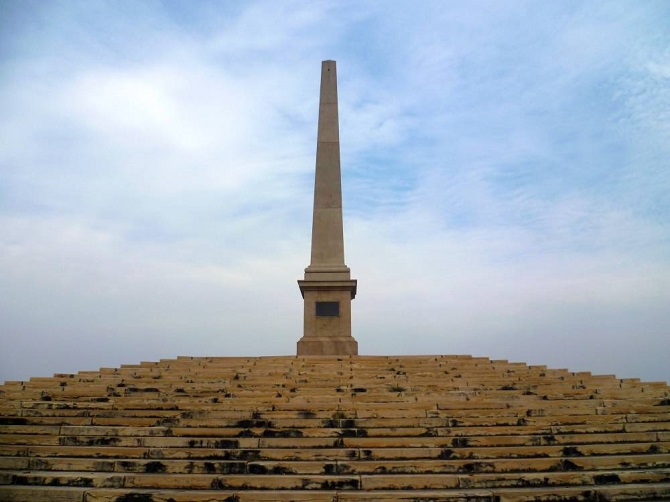 Coronation Park (Or memorial) is the last relic of the Delhi Durbar of 1877, and the memoir of King Edward VII’s ascension and coronation. A humongous statue of King Edward is placed in the park, a tribute to the man who laid the foundation of Delhi. An obvious showcase of British prowess, the park is one of the last memoirs of the age gone by 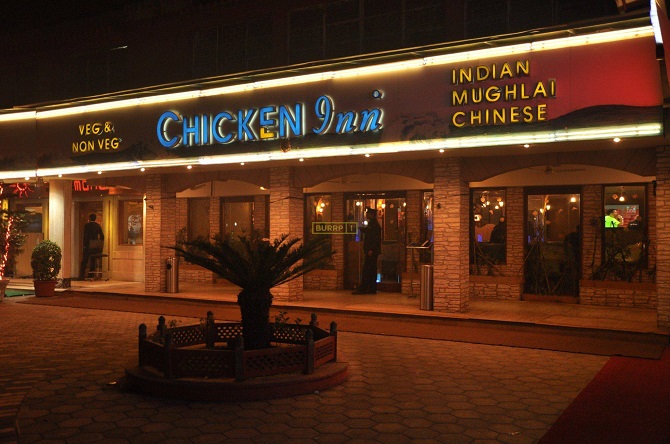 The foodie’s haven, Pandara Road is stuffed with restaurants of various cuisines and fusion food restaurant – it is bound to satisfy everyone’s taste! People swarm this area, especially during the Navratra Festive Treat where huge thalis piled with hot steaming food is loved by all! Every Punjabi swears by the butter chicken of Pandara Road which is an absolute treat for the taste buds, with the soft naans and the spicy chicken! 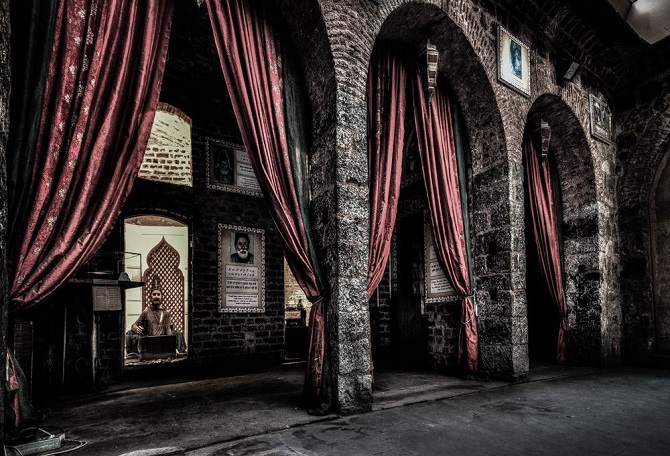 The legendary poet Mirza Ghalib, whose couplets are capable of making ones heart beat faster, stayed at this mansion during the last years of his life. Now, almost 200 years later, it has been transformed into a museum, with replicas of his statue, various portraits and his couplets. The essence of old Delhi, combined with a whiff of Urdu poetry, his house in Chandni Chowk is the remnant of a glorious age gone by. 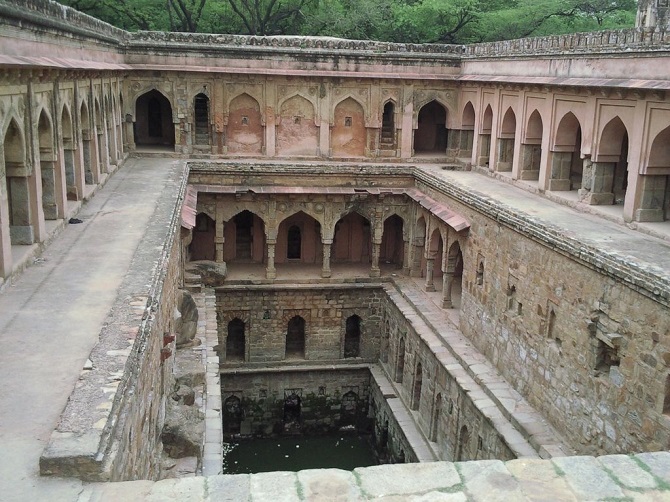 The lesser known counterpart of Agrasen ki Baoli, Rajjon ki Baoli is situated in the Mehrauli Archaeological Park. The step wells of Gandhak ki Baoli and Rajjon ki Baoli have been restored and repaired recently. Initially occupied by masons (raj), it was built in the reign of Sikander Lodi. In comparison to the other baolis, it is very ornamental in structure and design. 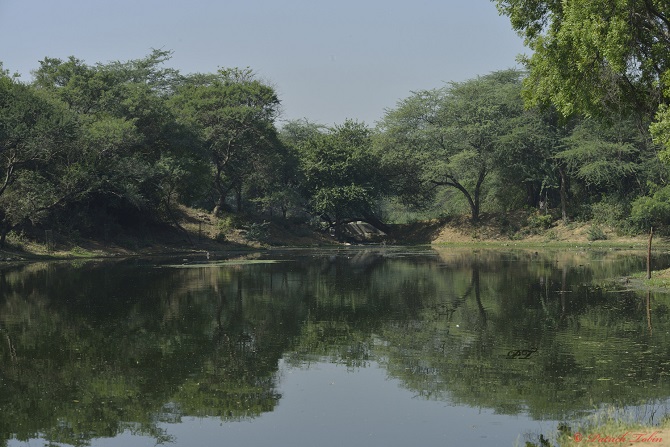 A sprawling green forest, Sanjay Van is a nature buffs wildest dream come true. High population of birds amongst the trees makes it an extremely pleasant trip, pleasing both to the eyes and ears. Moreover, this place is also rumored to be haunted – possibly because of the many graves and mausoleums of Sufi saints, with bits of the Qila Rai Pithora. A favorite spot for walkers and joggers alike, Sanjay Van provides the splash of greenery Delhi desperately needs. 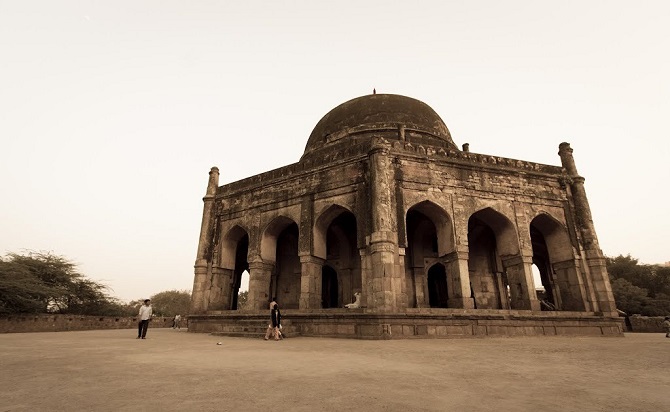 Another special of Mehrauli, Adam Khan’s tomb (Also known as bhool bhulaiyaa ‘The maze’) was comissioned to be built by Akbar, after he ordered his foster brother’s death post a betrayal. Dubbed ‘labyrinth’ because of how easily tourists get lost in the various corridors. Its proximity to the Qila Rai Pithora propagates the belief of it being haunted. 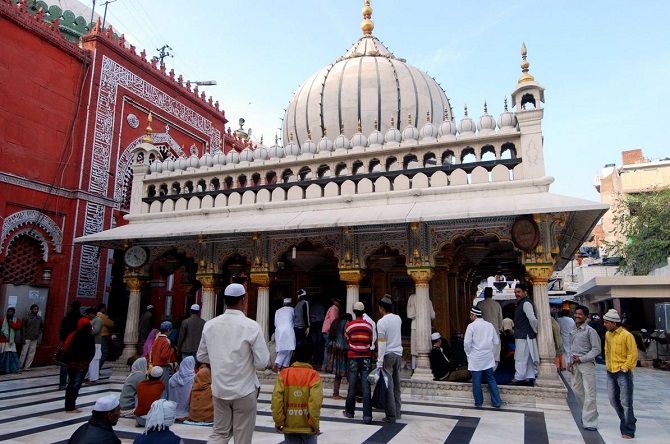 The oldest dargah is Delhi, belongs to Qutbuddin Bakhtiyar Kaki – successor of the famous Sufi saint Hazrat Nizamuddin. His annual Urs festivities used to be celebrated with great pomp by rulers such as Sher Shah Suri who later built Gandhak Ki Baoli nearby. It hosts the wonderful inter faith festival called ‘Phoolwalon ki Sair’ – which began in the times of Akbar Shah II. The perfect place to experience peace and mysticism, the dargah is kept in a well-kept state 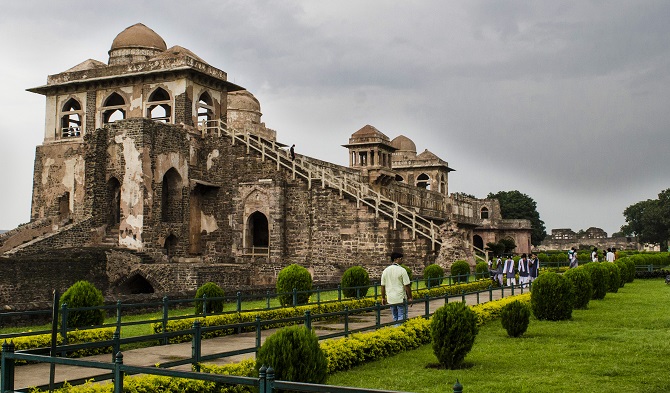 Named after the illusion it caused of a ship floating on a lake, Jahaz Mahal acted as an inn to travelers around the world. Another site of celebration of the Phoolwaalon ki sair festival, qawaalis and fire dancers perform here as a festival special. The chhatris are intricately carved, and the huge arches are an architectural marvel. 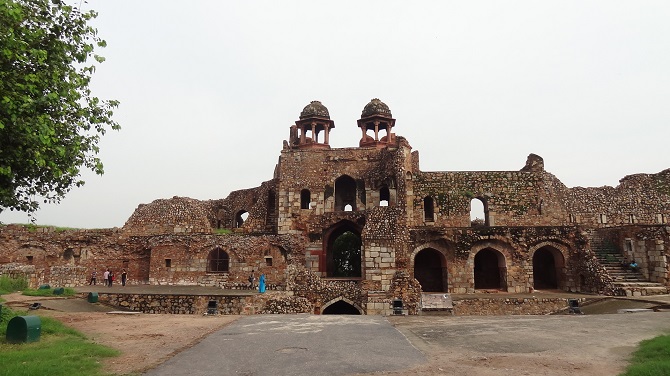 The relic of the third city of Delhi was set up by Ala-ud-Dn Khilji of the Delhi Sultanate as a defense mechanism against the Mongols and is primarily known for its palace of a thousand pillars – the Hazar Sutan. Surrounded by vast stretches of greenery, the fort is a sight to behold with its palatial structures and is occasionally punctuated with other remnants of the Khilji dynasty nearby. The rubble built walls and the domed entrances make it seem highly unlikely to be a spot for warfare. 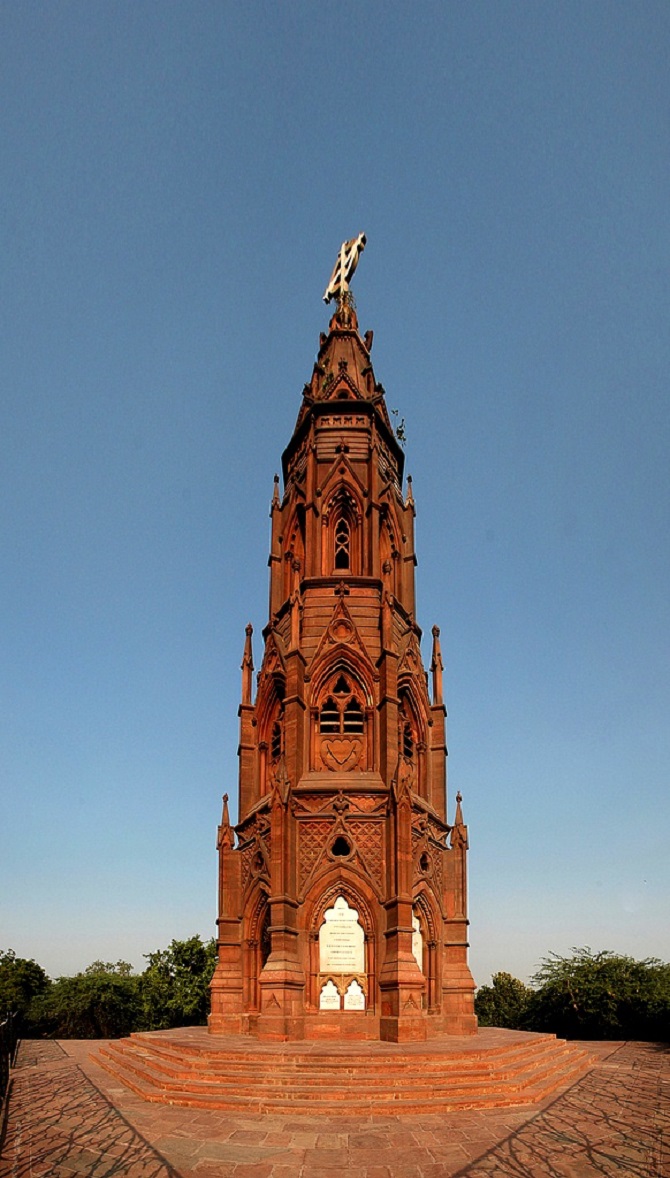 Built in remembrance of the martyrs who fought against the British colonial rule in 1857, this is a fitting tribute to those who orchestrated the first war of independence. Also known as ‘Ajitgarh’ literally Palace of the Unvanquished, it is built with red sandstone in the Gothic style having memorial plaques on the lowest tier. The greenery of the northern ridge of Delhi surrounds this area, leaving the viewer with a studding picturesque scenery. 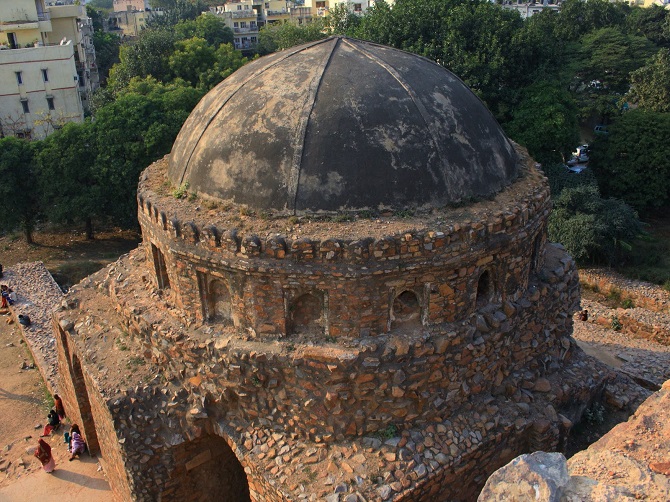 Built with rubble masonry, this structure served as an observation tower to monitor troops. Reputed to be the most puzzling monument of Delhi, its purpose has only been speculated. It is also connected to the shrine of the Sufi saint Sheikh Hasan Tahir and is sandwiched between residential houses. The design is utilitarian and not a trace of any ornamental decorations seems to be visible. 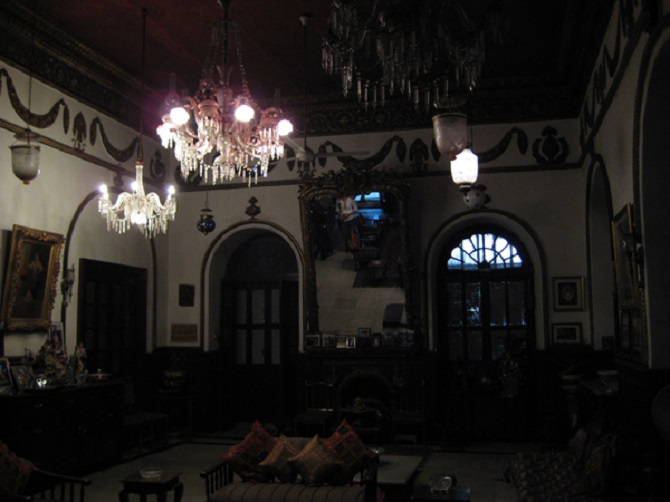 The vast haveli consisting of three floors and over 120 rooms, is one of the oldest mansions of Delhi. Built in baroque style, the haveli is still inhabited by the family whose history spans generations since it gained repute after the 1857 revolt. Spreading over an acre, it is the site of a legend – Chunnalal Rai, the richest man in Delhi after the sepoy mutiny who purchased the Fatehpuri Mosque and preserved it. 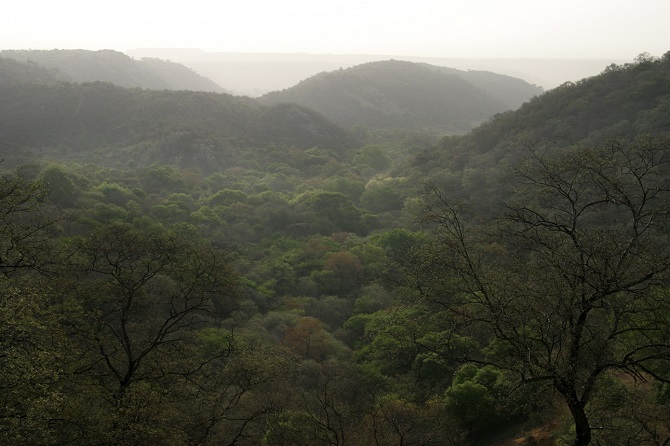 The last ‘sacred forest’ of Delhi, Mangar Bani is an extension of the Aravalli range. Hidden amongst the leaves is the shrine of Gudriya baba who attained salvation here. Recently it has been in the spotlight for being deemed as a ‘no construction zone’, Mangar Bani is being kept alive by green activists and nature lovers alike. 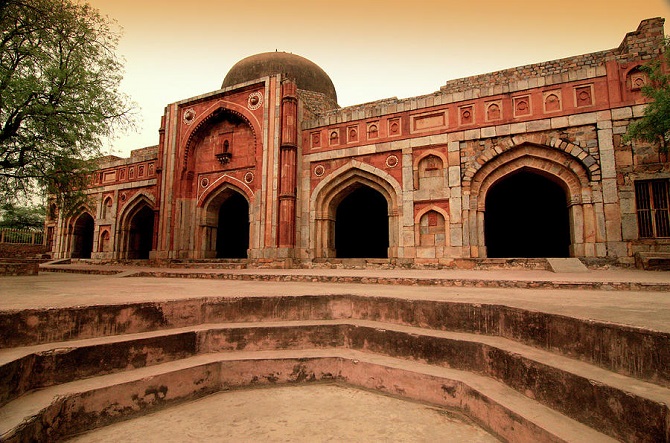 This mosque has been rumored to be the haunted by Jinns, something which has grabbed a lot of eyeballs recently. The huge loping arches and the high ceilings are elaborately designed and house the tombs of Jamali, a Sufi saint, and Kamali, a man of unknown past.

Its Red and blue coloring and the Koranic inscriptions contrast beautifully against the green surroundings. 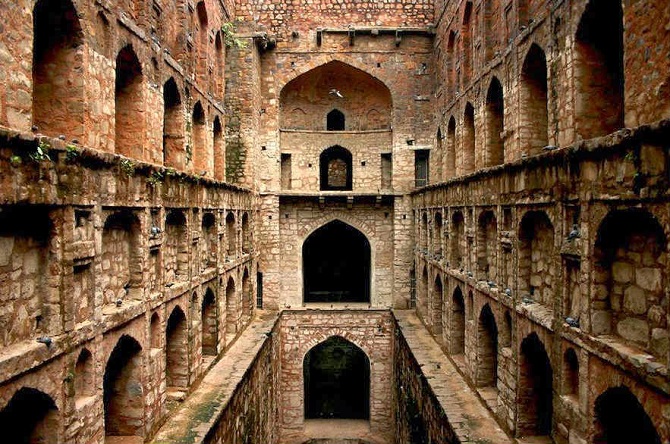 Built during the Mahabharata era, this massive structure resembles a well with 103 steps leading down to it. Close to the Jantar Mantar, it has been said to be revived by an Agarwal merchant years after it being built. The waters seem to be rumored to have a mystic appeal, adding to the notion of the place being haunted.