No matter what a man is or where he is standing, he must never forget the reason for his existence- his mother, father and God. Worshiping God purifies the soul of man and takes him closer to God. The southern part of India, well known for its cuisine and culture, is also reputed for its Temples. If you don’t have any idea about this side of the south, you’re about to find out that there’s more to it than “anna” , rascala” or“vanakkam”!

Resting on the Tirumala hill in the southern part of Andhra Pradesh, the divine temple is the abode of Lord Venkateswara. The tirupati is the wealthiest temple in the world . The outer dome of the main temple is all covered with gold. It has been patronized by many various rulers and kings over the years. Almost every important person in India might have visited the temple at least once in their life. One has to cross seven hills to reach the temple. People even cross the seven hills on foot out of immense devotion chanting the name of Lord Venkateswara. It takes four to five hours to complete the journey on foot but it is convenient to take a bus. There is so much crowd during festivals that devotees have to wait all night long for the auspicious glimpse of lord Venkateswara. Needless to say, the temple is extremely popular and the most visited temple in India. 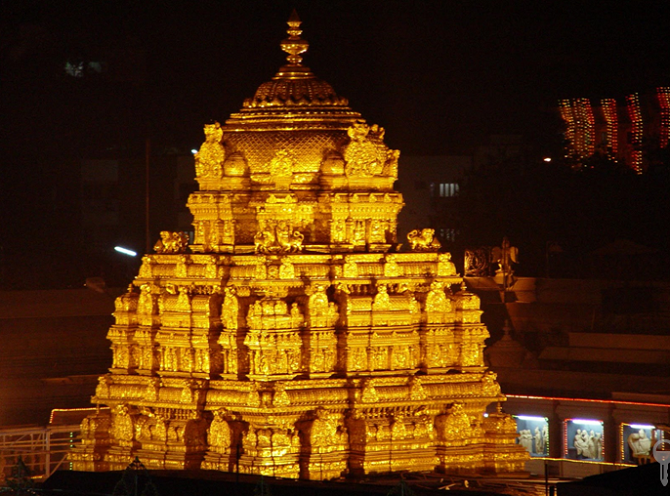 Ancient Madurai in Tamil Naduis home to this magnificent and important temple of South India. The temple premises are huge, covering an area of 15 acres. There is a holy pond in the interior of the temple. It is believed that if the devotees bathe in the waters of this pond of Golden Lotus on a new moon day, the first day of the month, days of eclipse and other auspicious days and worship the Lord, they will be blessed with all their aspirations for success. The temple is very popular for its architecture, sculpture and art. If there’s one temple you have to visit in south India, then this has to be it. 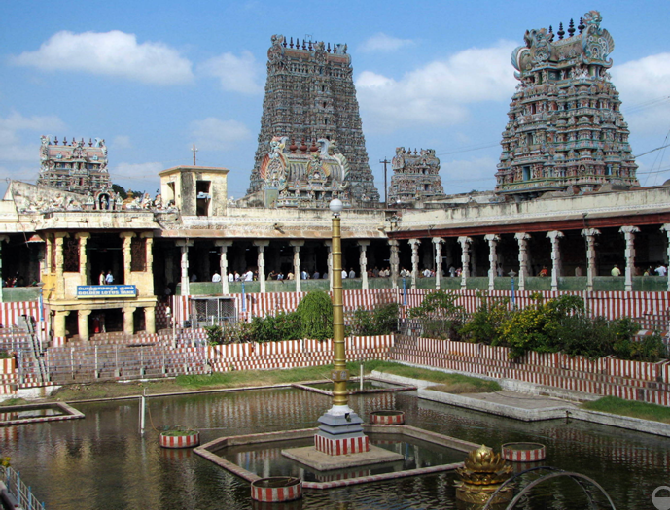 The Padmanabhaswamy temple is located in the centre of Thiruvananthapuram, the capital of Kerala. The temple is built in Dravidian style. It is the abode of the deity Padmanabha, who has been resting here and will, for all eternity. It is one of the richest temples and the complete riches have not been found yet. It is because a major part of the treasure, which belonged to Padmanabhaswamy is still buried inside one of the six vaults of the temples. The reason for the vault still remaining closed is that it has a serpent’s image on its door indicating a threat to anyone who tries to enter it. More or less for the same reason, the vault was declared forbidden and the vaults are not a part of temple’s treasury. Only the people who profess Hinduism are permitted into the temple. And one must follow a strict dress code to worship here. The devotees believe and place their soul in the swamy. Many devotees visit the temple on every festive season and thank him for his grace he showed upon them. 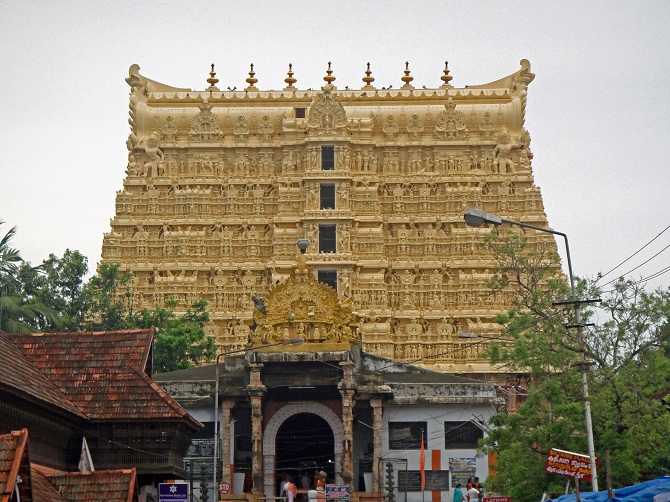 Constructed in the Dravidian style, this temple is the largest functioning Hindu temple in the world. It is dedicated to Lord Vishnu, the savior of everyone, according to Hindu mythology. Covering an area of over 150 acres, the temple is situated in Trichy, Tamil Nadu. The temple is enclosed by seven concentric walls. It contains 21 gopurams (towers), 39 pavilions, fifty shrines and many ponds inside and this vastness makes the temple and its premises a city in itself. 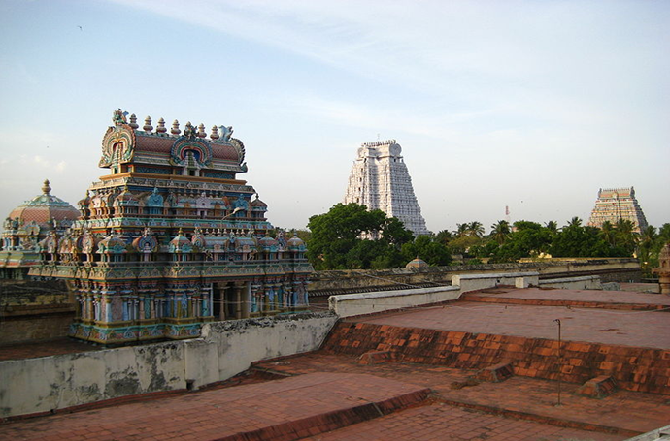 The temple is dedicated to Lord Siva, the destroyer. It is located in Rameswaram, on Pamban island in Tamil Nadu. There are two deities of Siva inside the temple, the principal one was built by Goddess Sita and the other is said to have been brought here from Kailash (the abode of Siva, in the Himalayas) by Lord Hanuman. It has high walls enclosing it in all four directions and two magnificent gopurams (towers) in the east and west direction. There is a long corridor running in between these towers and in fact, the corridor is the longest for any Hindu temple in India. The corridor has got really exquisite and beautiful interiors. 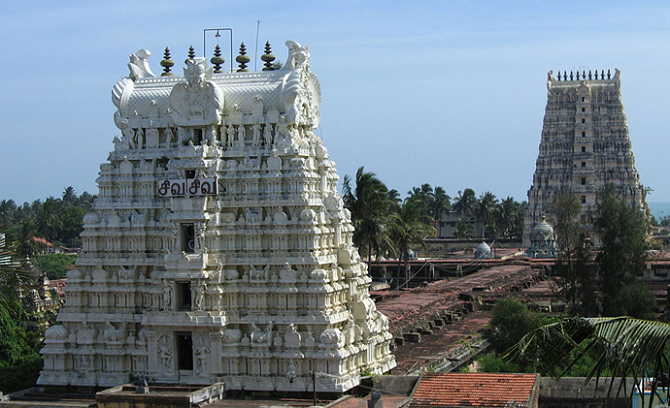 As the name suggests, the temple was built for Goddess Chamundeswari or Durga, who is known for her wrath and ferocity. It is located on the Chamundi Hills, about 13 kms from the main city, Mysore. It is one among the 18 Maha Shakti Peethas (divine power resting places). The doors of the temple are made up of silver and gold. The temple is very popular in South India and is a must-see spot in Mysore, Tamil Nadu. 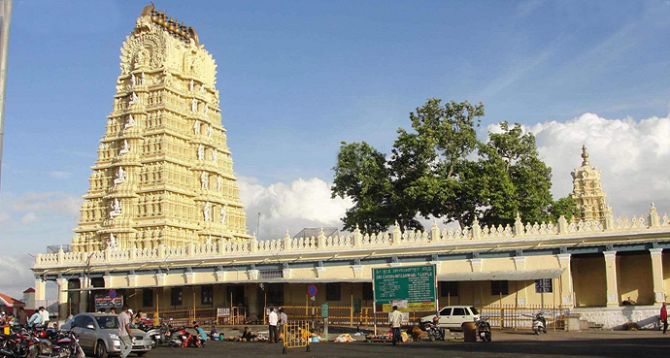 This temple is the only one of its kind and is more of a spiritual park than a temple. People who seek peace for a while, come here and meditate. Built across 100 acres of land, the golden temple gives the tourists complete tranquility. And as the name suggests, the central part of the temple is all covered in gold and the intricate work done has significance from the Vedas and surely has no match as of now. The periphery of the temple is star shaped indicating Sri-chakra, a God’s weapon. It is located in the southern end of the city of Vellore, Tamil Nadu. 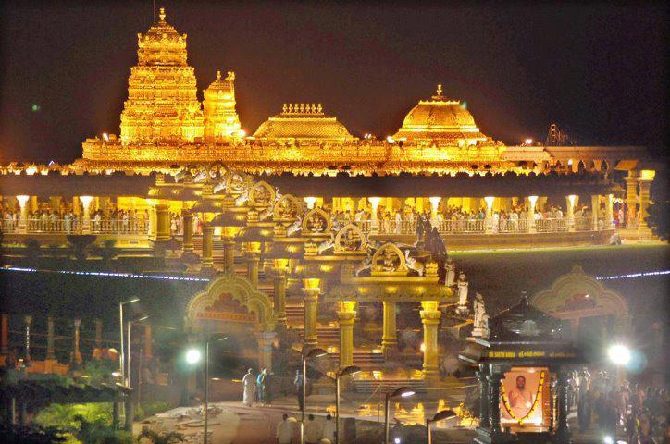 This temple is one of the country’s most priced architectural sites and part of UNESCO World Heritage Sites. The temple turned 1000 years old in 2010. This was built by the great emperor Raja Raja Chola I in dedication to Lord Siva. The temple was built adjacent to a river and the walls were built like a fortress.It is believed that the shadow of the gopuram (pyramidal tower) never falls on the ground, such is the extent of the gopuram. It is situated in the Tanjavur region of Tamil Nadu. 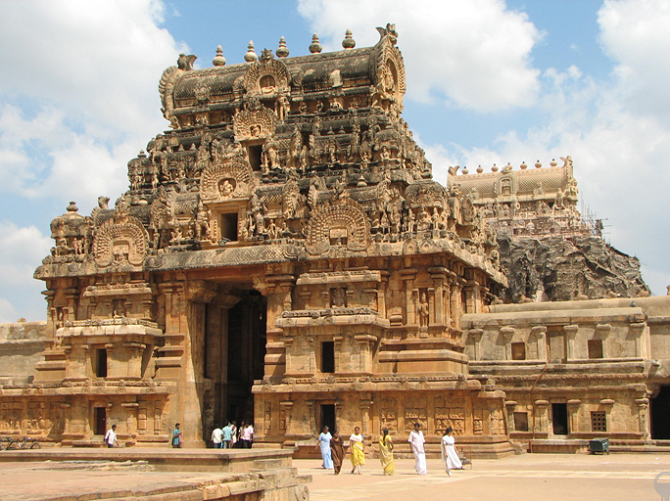 The Nataraja, ancient symbol for dance originated here and it is the largest and the most dedicated temple to Lord Siva. Built two millenniums ago, the temple is a place which still influences architecture and sculpture even today. The temple is known as the foremost of all temples. The deity resting here is Lord Siva’s form, Thillai Nataraja, the Lord of Dance. Spread over 40 acres, the temple is located in the town of Chidambaram, Tamil Nadu. 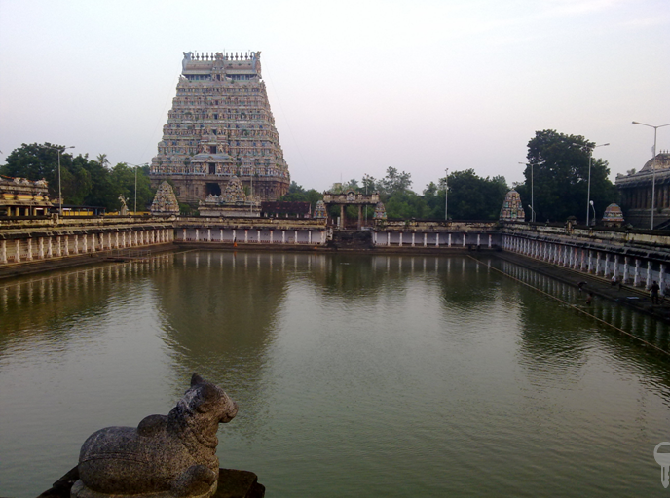 It is located in Bhadrachamlam hill of Telangana State and is devoted to Lord Rama and Goddess Sita. Legend says that Kancharla Gopanna, the greatest devotee of Lord Rama constructed this temple. Ramayana says that Lord Rama has also visited this place. The thing of utmost interest about this place is the Ram-Navami celebrations, which is the wedding day of Lord Rama and Goddess Sita. Thousands of people gather here from all over the world. The hill is surrounded by Godavari river, which purifies everyone who takes a bath in it. 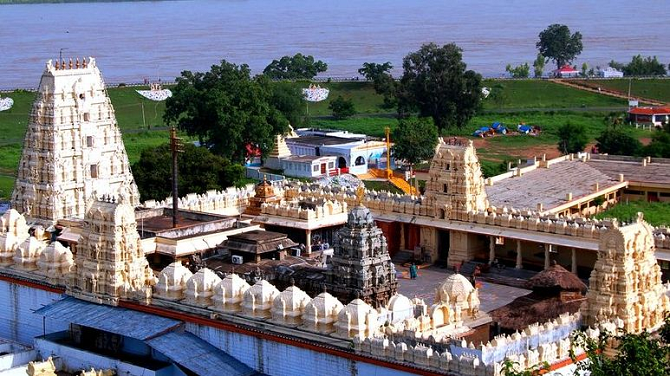