The Mountain peaks of India are set as jewels in the crown on Indian Map. These dazzling mountains are pride of India. Most of these Highest Mountain Peaks are located in the Northern and Northeastern part of India. Majority of the mountain peaks listed below are part of Himalayan Range and Karakoram Range stretched between three countries namely India, China and Pakistan. Twelve out of hundred highest mountain peaks of the world are located in India and on Indian boundaries.

Many of these mountain peaks are the popular trekking destinations for people from all over the world. Every year thousands of trekkers from around the world participate in various exploration and expedition projects. They are attracting people since ages. The northern peaks of India are the most favorite destination for hiking, trekking and climbing. Some are attracted to the splendid beauty of the snow capped mountain peaks and the others are attracted towards the adventure of climbing. 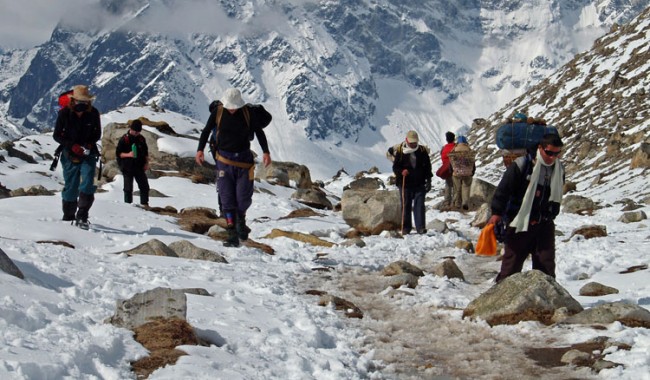 Essentials Of A Camping Tent

The Kamet is the highest summit in the Zaskar mountain Range of Garhwal region in the Chamoli District of Uttarakhand. Kamet is second highest mountain summit of Garhwal Himalayas and third highest mountain peak of India with an elevation of    7,756 m . Kamet mountain peak is surrounded by three major neighboring peaks and lies very close the Tibet. It is situated north of the main range and is more remote and therefore less accessible than some Himalayan peaks. However, the standard route offers a relatively straightforward ascent, starting from the East Kamet Glacier and ascending via Meade’s Col, then continuing on up the northeast edge of the north face. 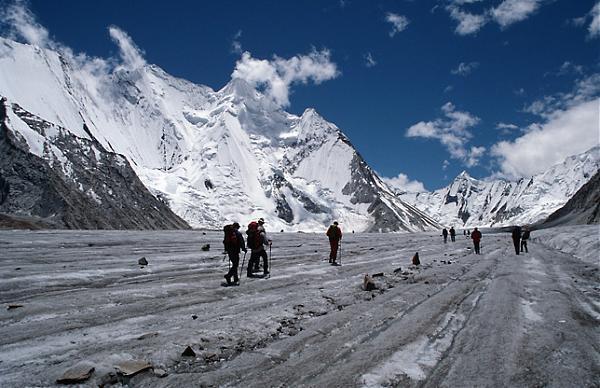 The Saltoro Kangri is the highest peak of Saltoro Mountain ranges,a sub range of Karakoram, the biggest range of greater Himalaya mountains. Saltoro Mountains are situated at the center of great Karakoram and very near to the longest glaciers in the world, the Siachen Glacier. The Saltoro Kangri is 31st highest independent mountain peak in world with an elevation of 7,742 m (25,400 ft) in Kashmir.

Saser Kangri I (or Sasir Kangri) is the highest peak in the Saser Muztagh, the easternmost sub-range of the Karakoram range in India. This massif lays toward the northwestern end of the Saser Muztagh, at the head of the North Shukpa Kunchang Glacier, a major glacier, which drains the eastern slopes of the group. The mountain stands at an elevation of 7,672 m (25,171 ft) and is ranked at no. 35 in world’s highest mountain peaks. Saltoro Mountains are situated at the center of great Karakoram and very near to the longest glaciers in the world, the Siachen Glacier. 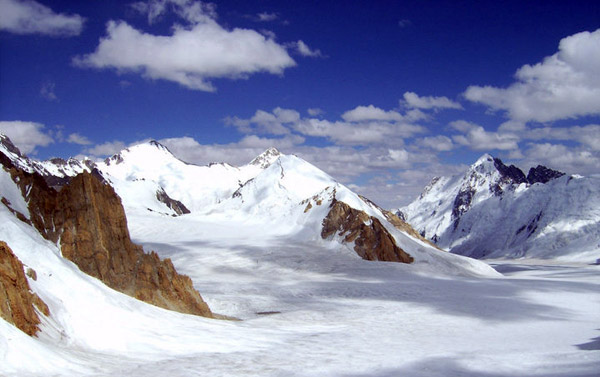 Mamostong Kangri or Mamostang Kangri is the highest peak in the remote Rimo Muztagh range, which is a subrange of the Karakoram range in India. The Karakoram Range is spread in three countries namely Pakistan, India and China. Mount Mamostong lies in Indian part of Karakoram Range. The mountain stands at an elevation of 7,516 meters (24,659 feet) and is ranked 48th in world’s highest peaks It is located about 30 km east-southeast of the snout of the Siachen Glacier. It is the 48th highest independent peak in the world.

The Rimo massif is located at the northern side of Rimo Muztagh in the famous the Karakoram ranges. The striped mountains are lies northeast part of the great Siachen Glacier with an elevation of 7,385 m (24,229 ft). Rimo mountain are consists of four peaks, the Rimo I is the highest peak among them with 7,385 m (24,229 ft). The Rimo Muztagh is bordered on the north by the Rimo Glacier, which drains to the east into the upper Shyok River, and by the Teram Shehr Glacier, a tributary of the Siachen Glacier. To the northeast lie the Northeast Rimo Mountains and the Karakoram Pass, a pass on one of the historically important trade routes into Central Asia. To the north lies the eastern end of the Siachen Muztagh.

Hardeol also called as Temple of God is one of the major mountain peak of the Kumaon Himalaya located at the northern side of Sanctuary and guarding the Nanda Devi. The 7,151 m (23,461 ft) highest Hardeol peak is situated in the Milam valley of Pithoragarh district in Uttarakhand. Hardeol peak lies very next to another Himalayan mountain peak called Tirsuli with an height of  7,074 m (23,209 ft). The Chaukhamba summit is the highest peak in the group of the Gangotri situated in the Garhwal Himalaya region of Uttarakhand. The Gangotri Group has total four peaks and Chaukhamba I is the highest among them with an elevation of 7,138 m (23,419 ft). Chaukhamba got its name due to the four big peaks along with each other.

Trishul is one of the three mountain peaks of a group located at mountainous regions of Kumaon in Uttarakhand state. The highest peak of the group is Trisul I at an elevation of 7,120 m (23,359 ft). The three got its name after Trishul weapon of Lord Shiva, Trishul mountain peaks are near to the Nanda Devi sanctuary.

Northeast of Badrinath is another impressive cluster of mountain peaks. The mountains rise almost on the Indo-Tibetan border with Mana and Kamet as the principal peaks. Mana itself marks the eastern extremity of the Zanskar range. It lies between the pass of the same name and the Niti Pass. The mountain peak stands at an elevation of 7355 meter (24,131 ft) and is ranked at no. 92.

Mukut Parbat is one of the neighboring peaks of Mount Kamet. Mukut Parbat is located south-southeast of Kamet. The mountain stands at an elevation of 7242 metres (23760 ft) and is ranked 97th in top 100 mountain peaks of the world. K12 is the second highest peak in the Saltoro Mountains, a subrange of the Karakoram range in the Siachen region, near Jammu and Kashmir. It lies near the Line of Control. Its name comes from its designation given during the original survey of the Karakoram range.K12 lies to the southwest of the Siachen Glacier; the K12 glacier heads on its northeast slopes and feeds the Siachen. The western slopes of K12 drain to the Bilafond Glacier system, and thence to the Dansam River, and eventually the Indus River.

Ghent Kangri (or Mount Ghent, Ghaint I) is a high peak near the north end of the Saltoro Mountains, a subrange of the Karakoram range. It is located west of the Siachen Glacier in an area under Indian control since 1984, but very close to the Actual Ground Position Line with Pakistan. Ghent Kangri is also known as Mount Ghent or Ghaint I. It is the sixty-ninth highest mountain in the world. The parent mountain of Ghent Kangri is Saltoro Kangri. It ranks 69th in the list of highest mountain peaks of the world.

Teram Kangri group is a mountain massif in the remote Siachen Muztagh, a subrange of the Karakoram range. The high point of the group, and of the Siachen Muztagh, is Teram Kangri I. The peak lies on the boundary between China and the disputed Siachen Glacier region near the line of control between India and Pakistan. The northeast side of the peak is in Chinese-controlled territory, the southwest side in the disputed Siachen area currently controlled by India.