It is for the first time that Auli has been selected as the venue for holding the International Skiing championship. The International Ski Federation has decided that the event will take place from 15th January to 21st January in Auli. The official announcement of this development was made by the Tourism Secretary, Ms Meenakshi Sundaram on 14th September 2017 in Dehradun. Even when the location, Auli is celebrated for holding the winter sports for nearly a decade term, it is for the first time that the large-scale international event will take place in the Auli ski resort.

What you must know about Auli skiing?

Auli, situated in the Garhwal Himalayas region is the one and only winter sports location in India which has been certified by the highest winter sports governing body of the world. It was way back in the year 2009 that Auli received its certification for conducting the winter sports for 10 years. It is just before the expiration of the 10-year term, that such a grand world level event will take place on the land of Auli.

Auli is just situated at a distance of 250 km from the holy place Rishikesh in the state of Uttarakhand and is known for providing glittering slopes as well as a nice and clean environment to the ski lovers.

Auli is topped with slopes having an altitude of 2500 to 3000 metres and thus caters to the likes of both the novice and professional skiers. Also, the slope at this location is celebrated as the best slope for the period 2009 to 2019, by none other than, the Federation of Indian Skiing. Not many know that France has given a nod for the development of Gorson and Auli as the ideal skiing resorts. 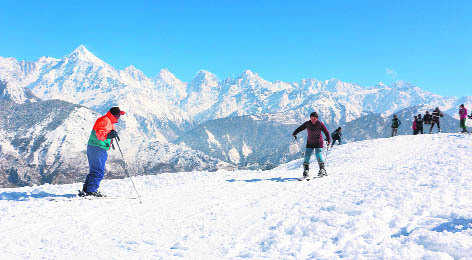 The International Ski event is a great way not only to promote skiing in Auli but also to give a boost to the state of Uttarakhand as a tourist destination for winters.This the reason the preparation for the grand event will be under the joint responsibility of the State Government and the Winter Games Federation of India (WGFI) with the Government looking after the required infrastructure and the WGFI overseeing the preparations for the smooth conduct of the event.

The arrangements of the accommodation for the players as well as the guests will be made in the hotels as well as guest houses situated in Auli and Joshimath.

When It’s About Snow, Consider These Destinations For Skiing In India

What to expect in the International ski event?

The members of WGFI have confirmed that the invitations will be sent to the European and South Asian countries, so a huge pop and show can be expected for the lovers of skiing. Two ski racing events are scheduled to be held during the championship.

The sheer height of the slopes with the spread of the snow kissed mountains will give an opportunity to the tourists to watch the skiing race amidst the powdered snow providing all thrill and adrenaline rush.

The International event of skiing is a significant step on the pathway of establishing the beautiful place ‘Auli’ as the Ski capital of our country and make it the world sports destination.

Top 10 Reasons You Should Go Skiing This Winter