Long stretches of sun kissed sands, teamed with blue frothy waters, beaches are the general favorite of the masses to unwind and have a great time. Offering peaceful moments to contemplate life overlooking the endless aqua waters, to having a sky rocketing adrenaline rush parasailing or fishing. Most of our best childhood memories is linked to collecting intricately carved seashells and patting the invincible sand castle into shape. Here are India’s best beaches, housing memories over millennia - 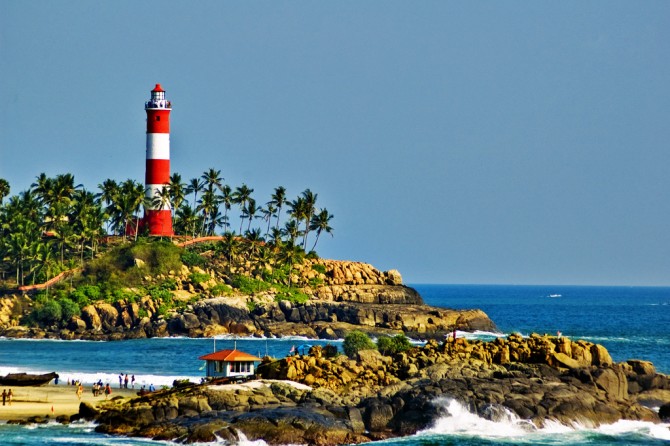 Undoubtedly, the pride of Kerala, Kovalam beach is outlined by endless coconut trees, which has given birth to its name. Shooting to fame in the 1920’s when the construction of Halcyon Castle began, Kovlam has been divided into three crescents – The Lighthouse, Hawah and Samudra. The black tinged soil fits in contrast to the wonderful orange setting sun in the background. A hotspot for hippies, often one can find many Ayurvedic salons nearby. The occasional fisherman’s boat can be seen while catamaran cruising here. 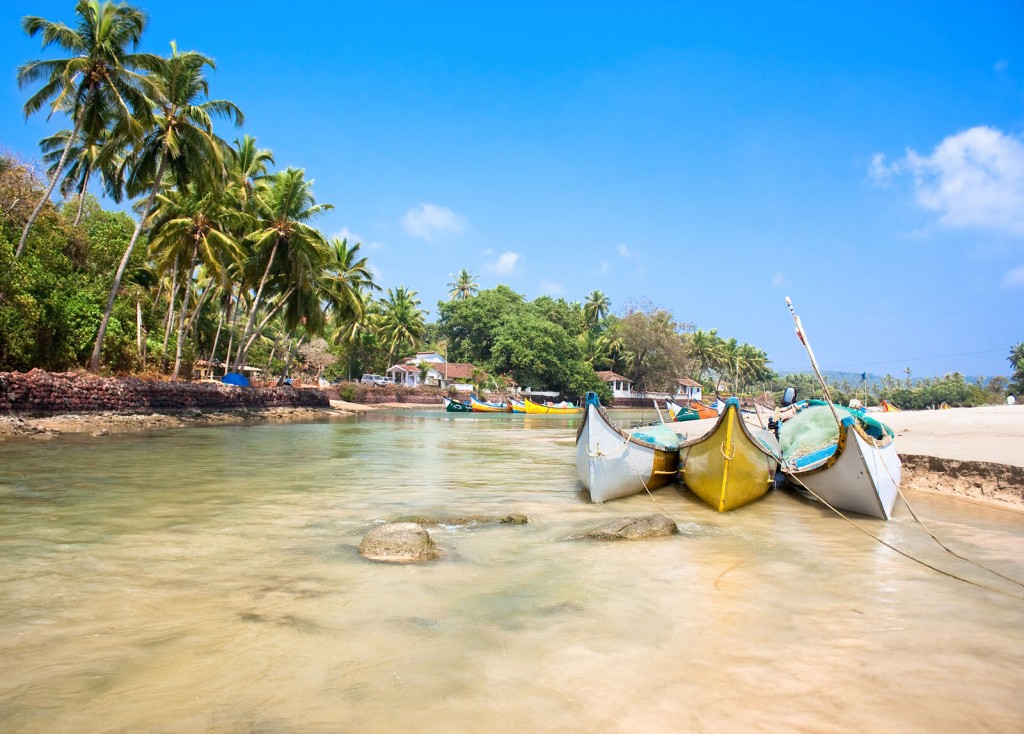 A favorite for tourists around the world, the beach stretches all the way from Candolim to Calangute. This getaway is perfect for those who want to relax and unwind, as well as for those who are into water sports – facilities such as parasailing, windsurfing and dolphin cruises is available. The nightlife is off the charts, with frequent concerts and parties happening nearby. The clear sandy beaches are peppered with umbrellas and resting spots. 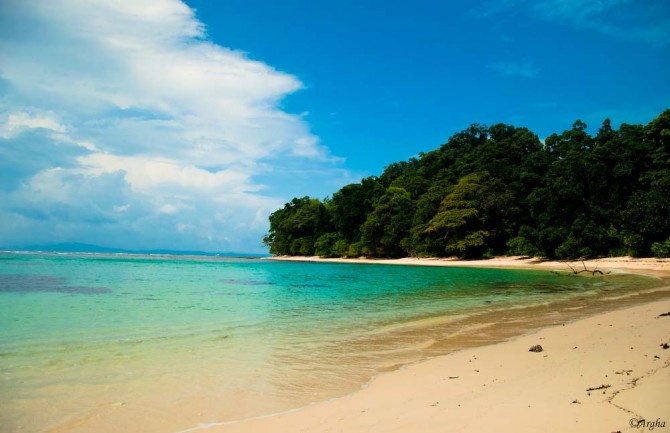 Situated 12km away from Havelock Island’s ferry pier, this beach has been declared as the Best Beach in Asia by Time in ’04. The pure white grainy beaches are painted alongside clear blue waters and a lush green vegetation. The fresh air is great for some I time and options such as snorkeling, game fishing and scuba diving are always available! 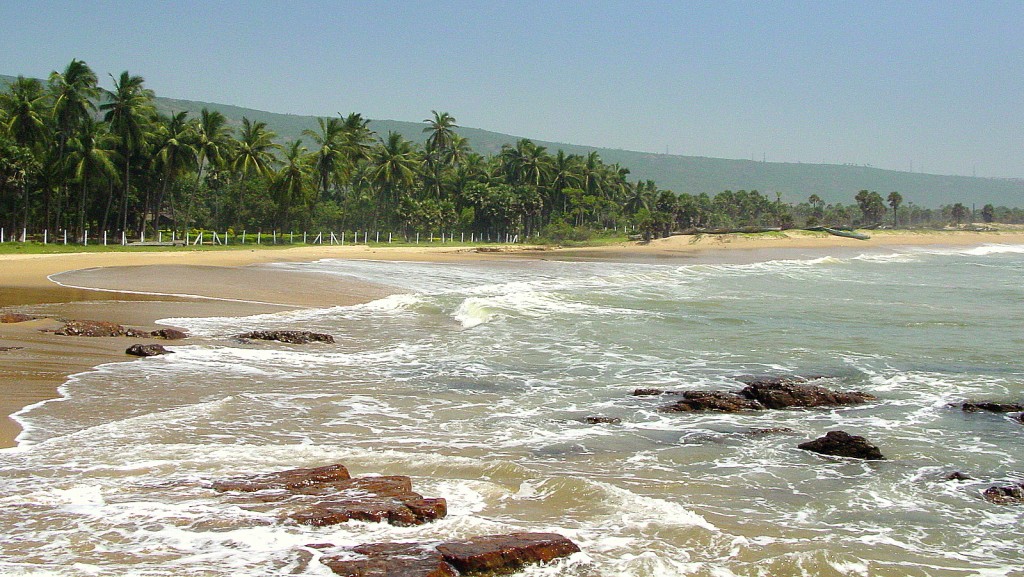 A clean fresh beach, Yarada is surrounded by hills on three sides and the Bay of Bengal on the fourth. A gorgeous counter part of the more well-known Rushikonda Beach in Vizag, Yarada’s golden sands are a treat for the senses. Mottled with greenery and rocks, it was once the site for the Visakha Utsav. Located in the hills nearby, is also the Simhachalam temple dedicated to the Lord Vishnu- a classic example of Chola architecture. The dazzling scenery is often the preferred background for avid photographers.

The cleaning waters of ‘Papanasam’ believed to wash away sins, Varkala beach is famous amongst academicians for the Varkala Rock Formation, which has now been declared as a monument by the GSI. The Sree Janardhan Swami Temple is located close by, feeding the beach with huge amounts of tourists. Mineral springs at the Sivagiri hill adds to the experience package. The best source for fresh fish food, Varkala sells great prawns and fish, whose fragrant spices waft throughout the beach along with hot chai. This tropical paradise is the dream spot for an all in one rolled experience for the adventurous soul. 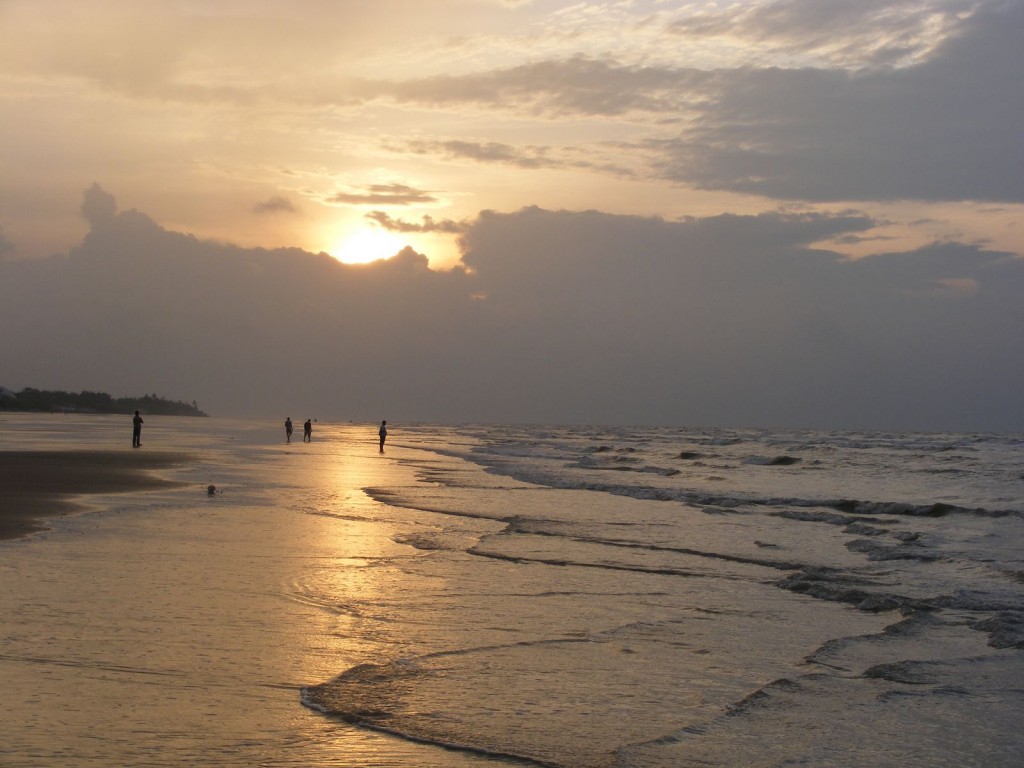 The longest drivable beach in India, Madarmani is a seaside resort village in Kolkata. The intensity of the waves is low, and one can often notice bright red crabs crawling around the beach. The pristine beach is perfect for a game of volleyball or for a boat cruise. ‘Jhaubans’ outlines the beach, which is pebbled in some areas – the others are perfect for walking along the coastline and sinking your toes into the cool sand. The local stalls have typical Bengali seafood – crunchy and chewy snacks which are great after a swim. 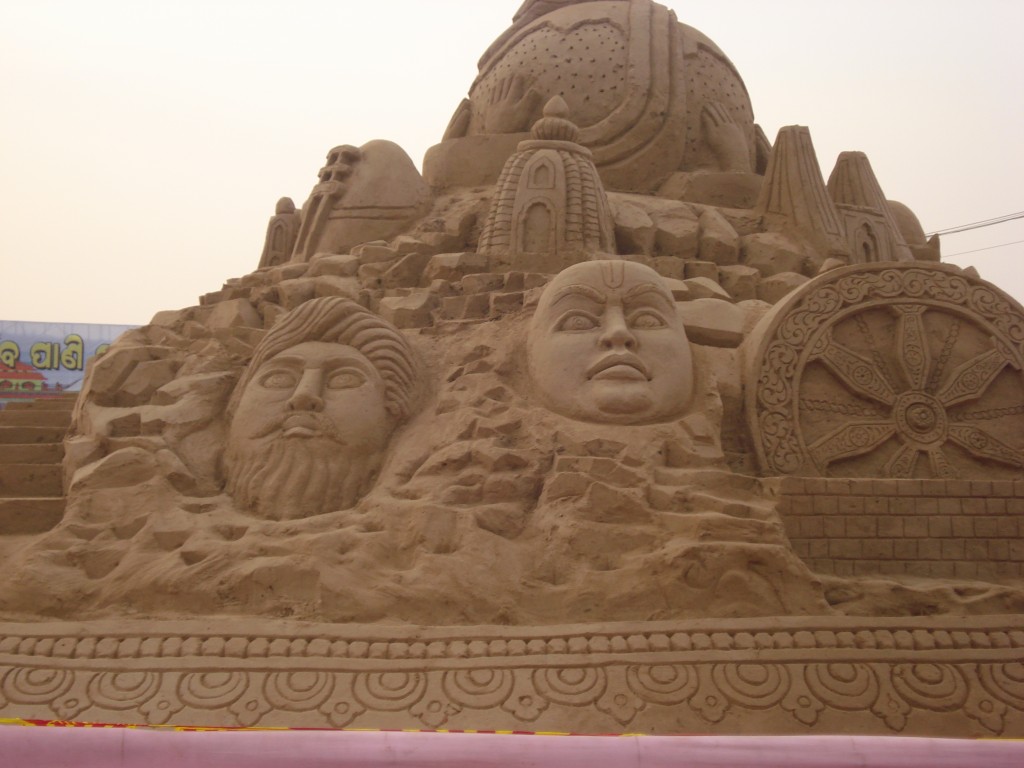 The site of the Puri Beach Festival, the beach puts up artists who create sand art displays, most notably by the famous Sudarshan Pattnaik. The waters are deemed to be sacred, with endless streams of pilgrims flocking to take a purifying dip in the waters, and to pay homage to the Lord Jagannath. The tranquility is astonishing and it is interesting to track all the seashells deposited on the sandy beach. It is truly ‘Bhogakhetra’ – a land of enjoyment. 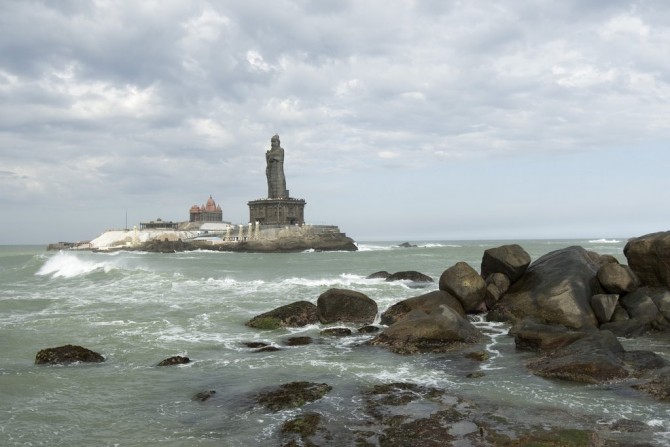 The southernmost tip of India (Cape Comorin) touches the Indian Ocean, ending the Cardamom Hills along the western coast. Housing the Kanya kumari temple, this is a notable pilgrimage spot. The beach has a colorful history – being a prominent center for pearl fishery in Ptolemy’s age, and St. Thomas’ entry point. The Thiruvalluvar statue located in the middle of the sea, is a common tourist attraction – its top providing a bird’s eye view of the beach and the ferries moving to and fro. The untouched greenery and the purple sunset makes it worth the trip. 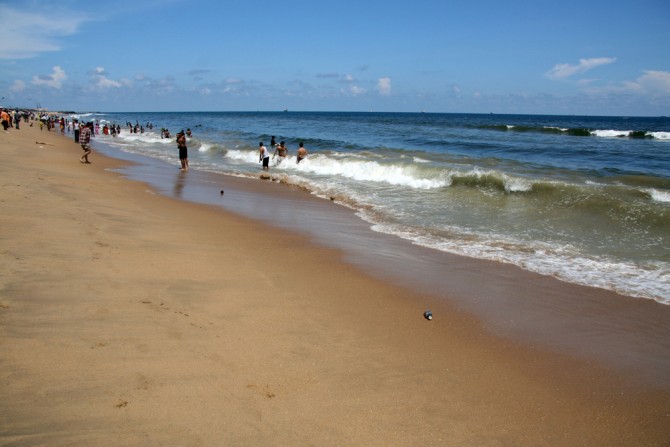 Juxtapositioned between two different ages, Marina beach is sandwiched between Chennai and Fort St. George in Tamil nadu. The MGR Memorial and the C.N. Annadurai memorial stand close by, along with various other statues of historically relevant persons. Though clogged with pollutants, the beach is the nesting spot for olive ridley sea turtles. The world’s second largest urban beach, Marina is frequented by the students studying in nearby colleges, and it’s hardly ever empty. Food stalls and pony rides are a common site here. 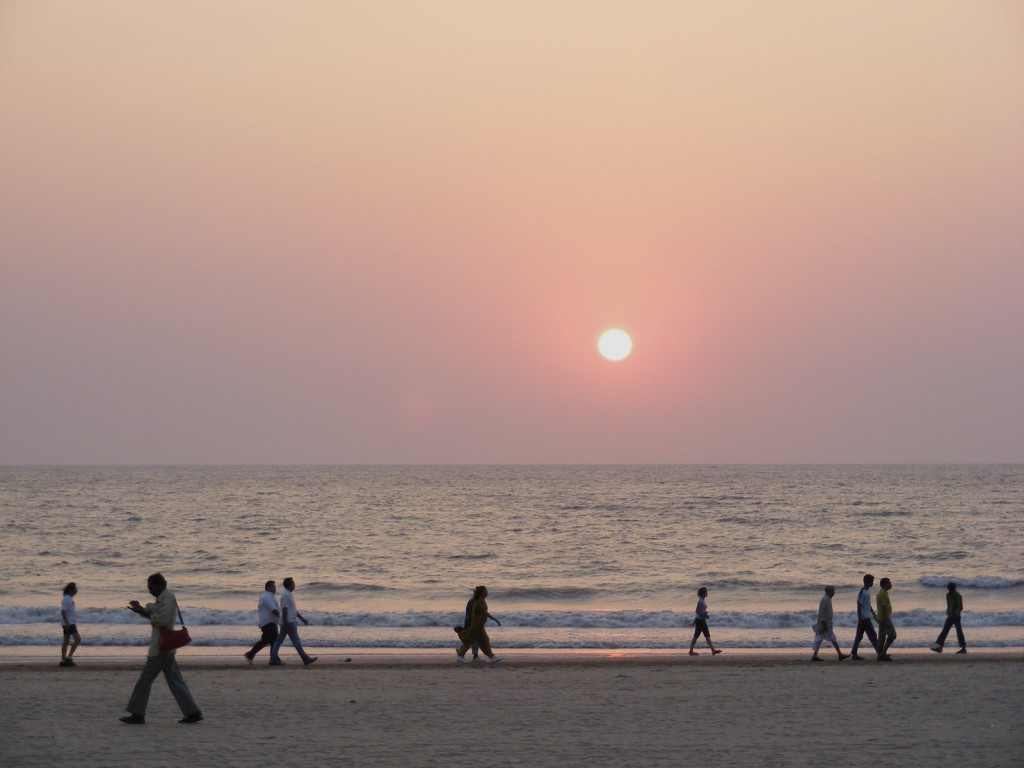 Juhu beach seems like a picture pulled out of a fairytale – with craggy rocks decorating the beach, its delicious street food reeking of Mumbai culture to the acrobats, toy sellers and horse carriages, it is a great place to hang out. Also having religious importance, it is a popular site for the idol immersing ritual during Ganesh Chaturthi. The Beverly Hills of Bollywood, the beach is star studded as the bungalows of Amitabh Bachhan and Yash Chopra line this area.