Most people tend to get confused between Bungee and Bungy as they think they have misspelt it but the truth is Bungee was started in England but the most commercially successful sport was started in New Zealand and they call it as Bungy. Bungee is also referred to the use of shock cords which is multiple preloaded core rubber, cased cords whereas ion Bungy which is originated in New Zealand is all about rubber cords. After the commercialisation, New Zealand has become the Hub of Bungy jumping as every year there isa number of tourists gather to test their limits and to increase the adrenaline levels in their bodies. There is a number of locations available around the area, and it is about 25 years ago when 28 people jumped off a bridge in New Zealand in the first ever organised bungee jump.

Queenstown Ledge Bungy Jump – Queenstown is a resort town which is in the southwest of New Zealand’s South Island. The place is famous for many reasons and one of them is Ledge Bungy jump spot which gathers adventurous geeks throughout the year. The ledge is situated 400m above the city which enables you to add your own twist on Bungy Jumping. There isa number of twists that you can try while jumping from the ledge as it is due to the specially designed harness. Once you will be at the top of the ledge, you can experience a view of the city which can’t be compared with anything else as it is just mesmerizing for a moment. Children under the age of 14 will require a written consent from their parents and must have a valid ID card. The whole activity is carried out under the supervision of professionals and has been around for more than 26 years in business.

An Idyllic Destination To Enjoy The Thrill And Fun Of Skydiving

Bungee Jump Scheveningen – Scheveningen is a modern seaside resort with a long sandy beach which was famous for its fishing industry in the19th century. After the change, there were millions of tourists who visited the place and wanted to settle at the beachside. Other than beaches, Scheveningen is also famous for its Bungee jumping activities which will give you the adrenaline rush and will be the most beautiful experience in your life. Once you will be at the top of the tower, you can enjoy the beautiful view over Den Haag and Scheveningen. The activity is open for all above the age of 18 and if you are below, you need a written permission from your parents or guardian. People with problems of high blood pressure are restricted with the activity as an adrenaline rush can create uncomfortable moments for them. Every year, millions of tourists visit Netherlands, and it is one of the reasons for your next visit to the country.

Bridge Bungee Jump – Bloukrans Bridge, South Africa – When it comes to jumping from the bridge, the Bloukrans Bungy is the world’s highest commercial Bungy bridge and also highest commercial natural Bungy jump in the world. As it is one of the best in the world, as the place is also recognised which had a number of world records associated with it. The bridge is about 216 metres high and depending on the weight and height, you will be going around 160 metres in total. The cord for the jump is attached to the back of the bridge and loops under the bridge to the jump point at the front. The bungee cord, therefore, pulls you out of your freefall into a huge pendulum swing as you rebound. The total price is included of the jump and if you want to take away your memories in the form of pictures and video, there will additional charges for the services. 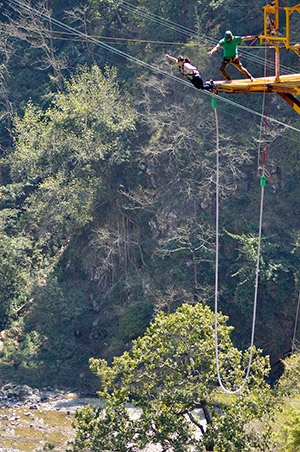 Bungee jumping in Rishikesh – Rishikesh is a city in Indian’s Northern state of Uttrakhand, which is in the Himalayan foothills beside the Ganges River. The river has its own spirituality for which it has been worshipped all around the country.Every year, the place becomes the tourist hub due to the number of options available which can be related to trekking, camping, river-rafting, mountain climbing, and bungee jumping. It is also famous for India’s highest fixed platform which is at Mohanchatti near Rishikesh. The cantilevered platform that is built on an iron cliff is over river HYUL which is a tributaryof the Ganga River. The whole cliff is designed by the officials from New Zealand and after the jump, the jumpers are lowered down to a drop zone in the river which is about 2 metres above the river water. The bungee jumping in Rishikesh cost usually varies depending on the demand and the condition as it is always recommended to confirm your plans as always as possible.

Victoria Falls Bridge, Border of Zimbabwe and Zambia – The spot which is also a no man’s land is in between the borders of two different countries are enough to increase your adrenaline levels. There are so many places around the world for bungee jumping, but when it comes to Victoria Falls Bridge, there is no hard-pushed to find a more spectacular place around the globe. The spot is at the top of theold railway bridge that Cecil ordered to be built with a total height of 111 metres. As per the locals, the place is also famous as “the smoke that thunders”.

Macau Tower, Macau, China – When it comes to the world’s highest bungee jumping spot in the world, Macau Tower holds the prestige as it is about 233m which will bring your heart to the mouth. You will be at the outer rim of the giant tower which makes the mainland of China visible from the highest point on earth for bungee jumping. Hackett and his team had to develop a “second-generation bungee cord” for the site, due to the height and need for it to fall straight, rather than swing.