“The crack in that crust is coming closer to me….

As I enter the valley, there is pin drop silence in the air….

The climate suddenly cools down.

Anxiety, nervousness and curiosity together play’s a riot inside me.

I hope the wall on the both sides doesn’t close down and sandwich me.

A walk through its belly uncovers a valley full of shadows and mystery.

Stubborn boulders, hidden waters and endless parallel walls run on both the side.

Just as I thought I am above to finish my trek, I am surprised by its dead end.

No worries, even I am stubborn. I will rappel down and go further, but won’t give up!”

No this is not the Grand Canyon valley. It is sahyadri’s very own Sandhan valley. I had heard a lot about Sandhan valley. Some of my friends had even been there. But I got my opportunity when I got a call from MT and 365hops. I had to volunteer leading a group to Sandhan valley along with a senior leader. Quite obviously, I instantly accepted the offer.

I caught the “bara chalis ki last local” going towards Kasara. As soon as I enter the couch I hear the loud laughing of a huge group. I did not take much time to realize that it was a Gujarati gang coming for the same trek. For the next 20 minutes those people were so busy playing dumb charades that I had to wait until I introduce myself as their Sub-coordinator. Even I joined them to play the game later. Oh, these Gujrati’s. You can love them or hate them. But you can’t simply ignore these humble ‘phafdas’ and ‘jalebies’.

Goecha La, A Stairway To Kangchenjunga 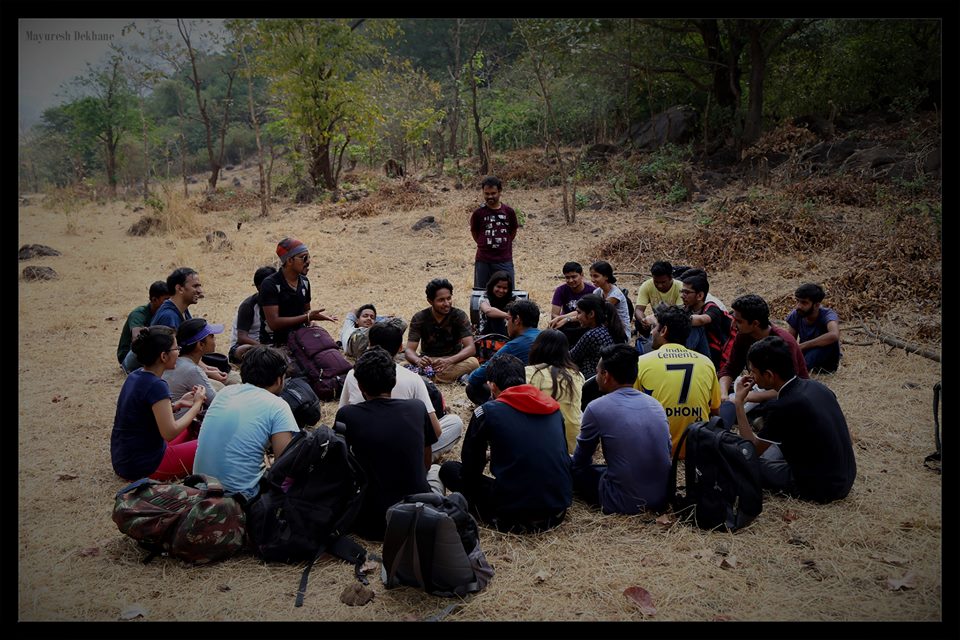 One by one the participants and our leader hopped on the train from different stations. Our leader Ashwin looked like Shivaji Maharaj with Bandana on its head, perfect beard and the crescent moon like tikka on his forehead. We reached Kasara at 2:30am. In the wee hours of the morning we reached Samrad village. I was standing and glaring at the Ratangad range. At starting, the clouds poured in dancing on the mountains with its curved and patterns. Slowly, it caught fire and the whole sky turned into a battleground with Red, orange and yellow color. Those magical 15 minutes were incredible and indescribable.

Eknath, a Kalsubai locality trekker joined our crew as third coordinator. We started our trek marching towards Sandhan valley. Within just 10 mins we encountered our first knee length deep pond. The participants were informed that there is a bigger hip length and a spine chilling pond. Everyone where crossing it from the edge to avoid the pond. But I entered the pond doing herogiri. As I was moving on its slippery surface and helping others to cross, Bham! I slipped and almost fell half inside the pond. “See, this is how you practice before attempting the bigger pond” I said sarcastically to everyone and they were like – “Yea Yeah sure! :P” 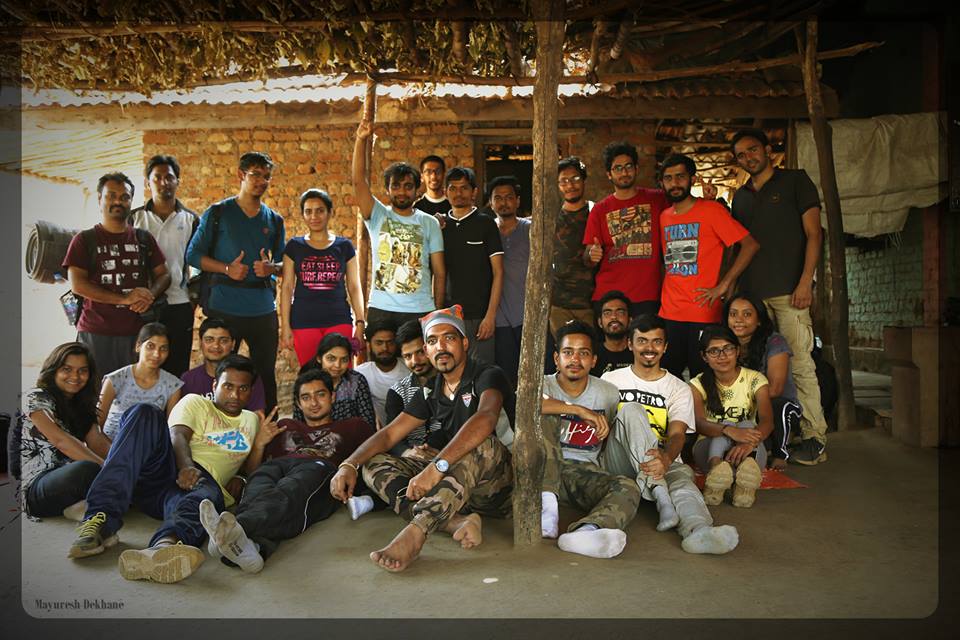 Soon we entered the much hyped pond, which was almost 300-400mts long. I first entered inside along with 5 other heighted people. We had to transfer bags and help other people to cross. While waiting for the participants I realized my feet were getting cramps in that cold water. Helpless, all I could do was to give a smile to other people in the same situation and asking them “maza aa raha he kya?” This extremely astounding place came beyond my expectations. Every step, every moment had its own set of challenges and surprises. The trekking was not a plain, uphill, muddy or grassy. The trek was all about jumping from one boulder to another. Rocks flow like a waterfall down through this narrow valley. The mountain walls on both the side rise high like city skyscrapers. These walls will make you feel its sovereignty and your meekness.

We stopped at a big boulder to have lunch. For lunch, everyone brought plain Thepla, Desi ghee Thepla, Methi Thepla, Khakra Thepla, Aalo parath Thepla, Spicy Thepla with sauce & jam, and few achaars. Me? Again The plas! J There was a member in our group named kartiki (Ketki, Kartik, Kartike). She chose to trek further along with a guide. Her group friends also left us to give her company. Atrangi yaari! J

Just as I thought that this valley might be never ending, the small light source started widening. The sky opened up and the valley was coming to an end. We came to a dead end where we need to rappel down so as to move further. I was excited for rappelling activity. When my turn came, Ashwin picked up a harness and realized that there was a part missing. He asked the technical expert and confirmed that it is totally fine to rappel down with it. Ashwin gave me a devil smile and decided to experiment the harness on me as I was the trainee. I wonder if I had any option to protest. But the technical guy already gave thumbs up so I didn’t mind. The excitement started building in my veins as I start my rappelling. I couldn’t hold my zest. I shouted out loud while getting down step by step.  Between all these emotions I forgot to carry my bag down. Oops! 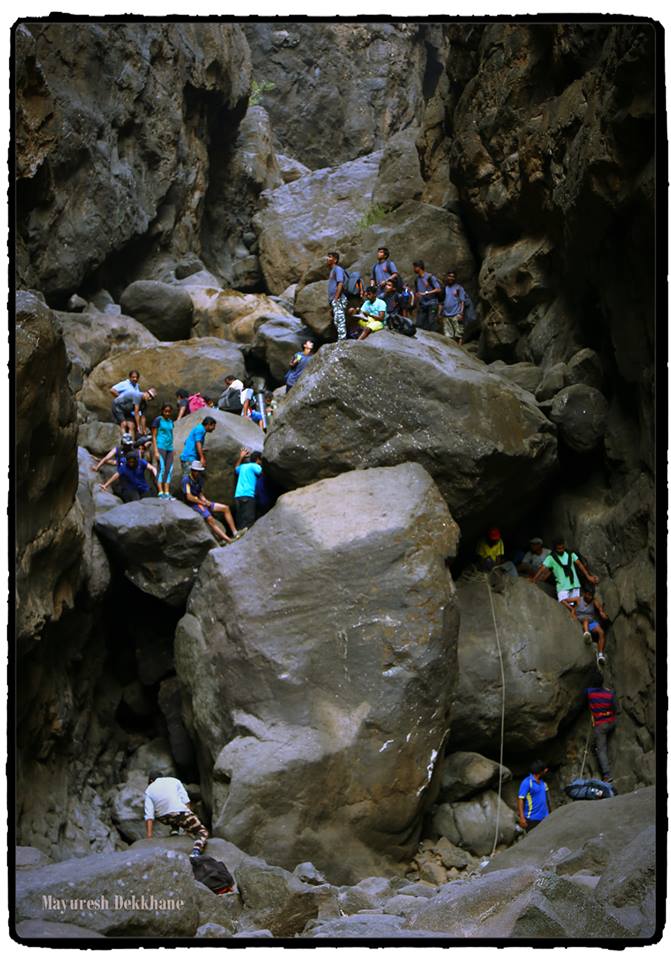 Anyways, after getting it back, I marched forward joining other people’s who already rappelled down. The group now got split into 2. I was just chilling with everyone when Eknath told that we need to slowly move forward as the crowd is increasing. We won’t get any space to sleep if we are late. I was not sure whether to move forward or not as our leader Ashwin was not there. I anyways collectively took a decision to move forward.

All I knew about Sandhan valley is that it had 2 ponds and 2 rappelling points as adventure throughout the trek. But actually, what came after this was truly adventurous. The rocks were more challenging. A new mystery unfolded every 10 mins. The path gradually got harder and harder. People at the back were literally asking for route among the uneven rocks. Then came one of the most exciting patch of the trek. We had to go through a narrow way by leaning down. It was like a cave. At its mouth opening, A rope was attached to get 12 feet down. There was no harness or anything, Just me and my rope. So it was important to hold the rope firm and tight. Soon another group arrived and then we marched together. We reached to the second and the last spot for rappelling. After getting down, we soon reached our campsite. We got rocky bed and also there was not much cold at Night. We literally cancelled campfire because it was already hot. After some rest and dinner, we gathered for some fun. A good 30 mins of dumb charades, horror story and then we slept. At 3 am in the morning suddenly, fierce wind started coming. The temperature had dropped considerably and everyone was shivering. Thank god I had my friend’s sleeping bag. I guess the nature took our ‘no cold’ complain too seriously.

Early morning we moved forward after breakfast to another base village called Dehne. This time in contras, the path was normal like any other trek. It was completely different from Sandhan with normal ground, mountains and dried yellow leaves. It was like a countryside feeling.   I was able to find some time alone while trekking and right few lines of my experience on the notebook. 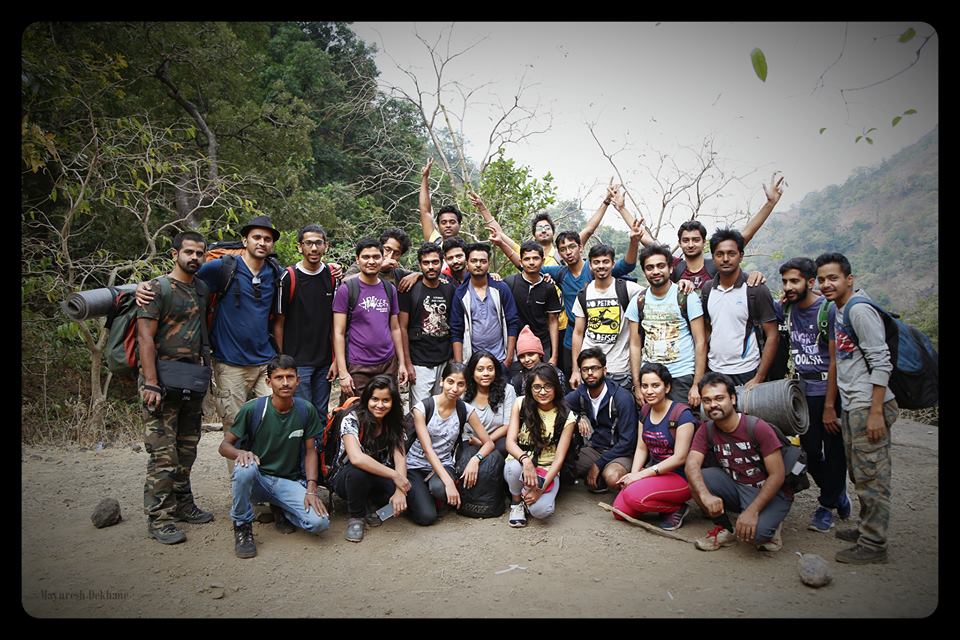 It is pleasant to walk on such a mountain with a leisure pace.

I especially loved the fallen red leaves. I couldn’t stop myself playing with it.

A cow is licking her cub clearly showing mothers love.

The sun is harsh, the only relief is the breezing air brushing against my sweaty face.

Women’s walk with vessels on their head

The kids hover around asking for some food. They don’t want simple chapatti mind you!

After reaching Dehne village we had a delicious lunch. The chapatti was made of rice. The curry made out of dried mango was amazing. We caught a crowded CST train from Kasara to get back.