Jhumri Talaiyas of India are mystical places filled with beauty and secrets. From a lake formed by a meteor impact to a church that submerges, these places lay undiscovered and hidden from the spotlight. Any reader with an adventurous heart is bound to catch a breath at their description.

Here’s introducing you to some of the fantastic ones: - 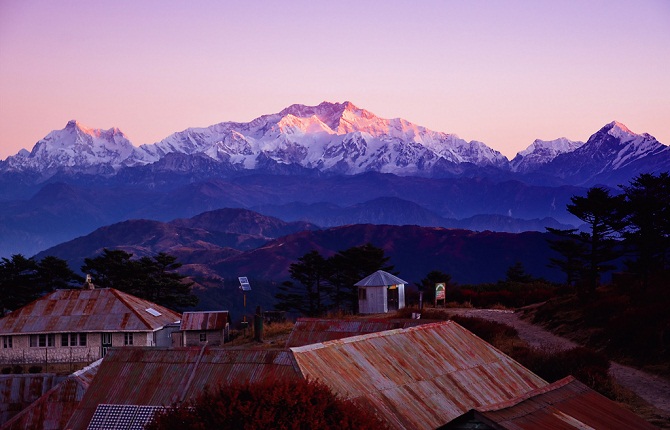 A quaint village exists at the top of Sandakphu, the highest peak in West Bengal, bordering Sikkim. An absolutely gorgeous and picturesque sight awaits one at the top – Everest, Kanchenjunga, Lhotse and Makalu, the world’s tallest mountains! Trekking on the Singalia Ridge is a great way to explore this area. 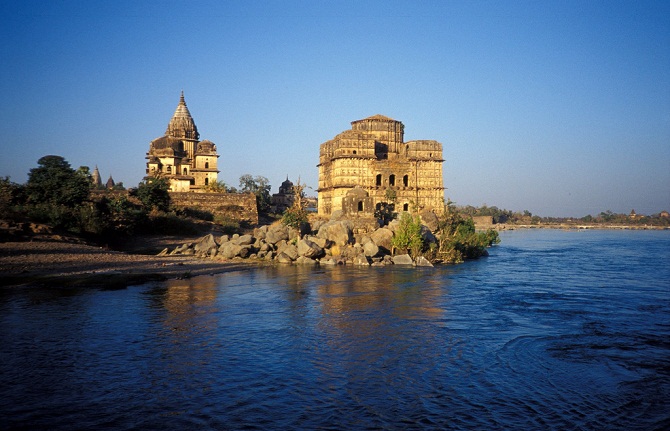 A huge palace fort grows out of the seasonal island at the bank of the Betwa River, in the heart of India – Madhya Pradesh. Best known for the intricately designed ‘chhatris’ (Canopies) and is home to a host of folklore revolving around the King who built the fort – Maharaja Rudra Pratap Singh. 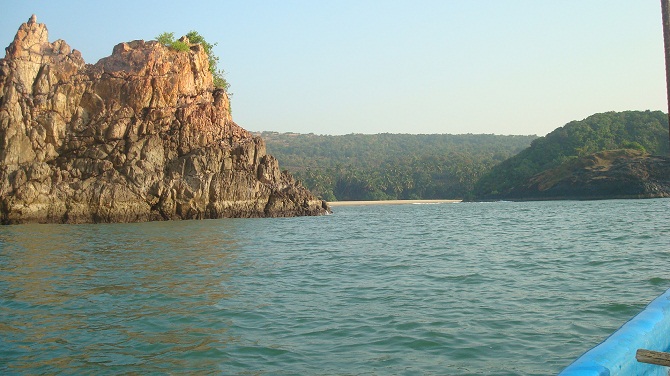 Maharashtra’s only scuba training Centre (IISDA) is also a pilgrimage spot for Hindus around Ramnavmi which is celebrated with vigor. The ‘Utsav’ generally occurs at the Mahapurush Temple. The clear waters, and the long beach are perfect for watersports such as snorkeling, scuba diving, boating and white water rafting. 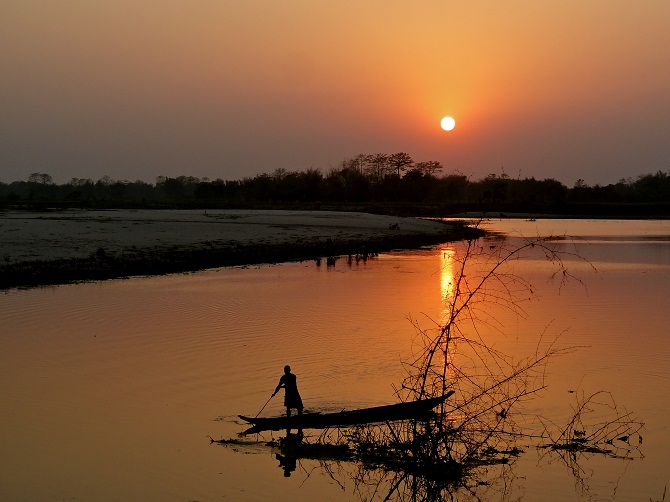 The island is situated in midst of clear blue waters and is home to a neo-Vaishnavite culture and the Mising Tribe, the ‘raas’ festival bonds everyone on this island situated on the Brahmaputra River. Prominently Assamese, their mask making is a beautiful art form. 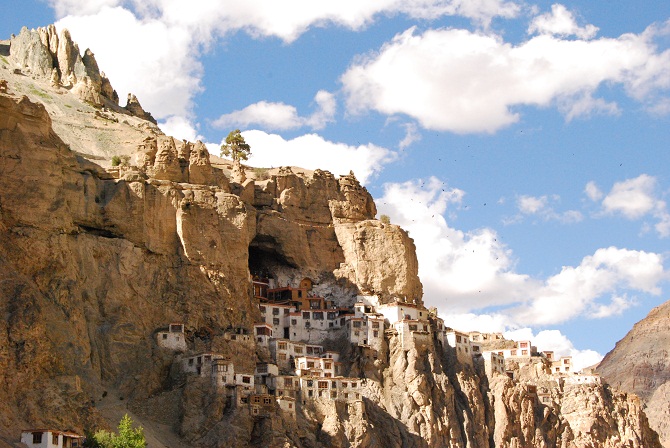 Nestled into a cliffside, the Monastery is located in Zanskar, Ladakh along the Lungnak River. A honeycomb structure, the Tibetan monastery has a library and prayer hall constructed within. Extremely peaceful, a trip to this site will definitely recharge your spirits! 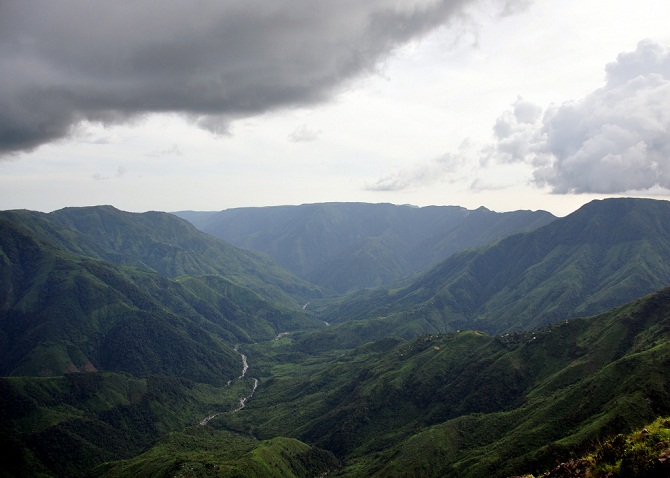 The ‘Scotland of the East’, Laitlum canyon is situated in Meghalaya’s capital-Shillong, in the East Khasi Hills. Perfect for a panoramic view of Shillong, it is a place which has been picked out of time. Painted with beautiful colours, the sunset is an unforgettable site. 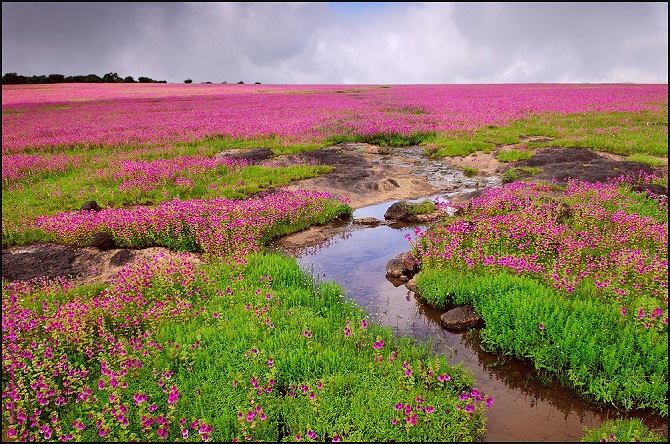 The ‘valley of flowers’ exists in Satara, Mahashtra. Deemed as a Biodiversity World Heritage Site, it lines the Western Ghats of the subcontinent. Host to a variety of exotic flowers, it is a surreal vision during the monsoon season when various species burst into full blossom. 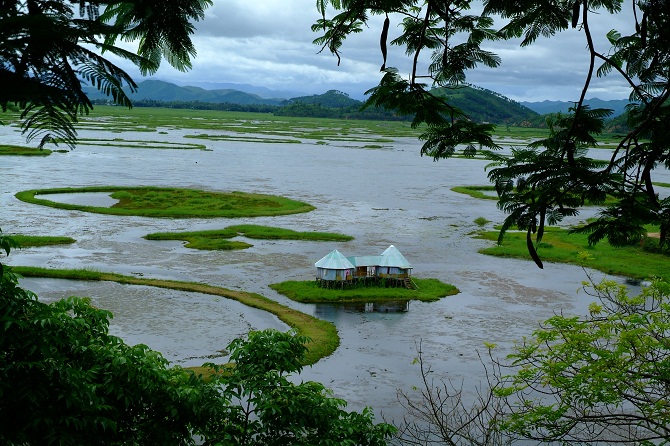 Manipuri for ‘The end of the stream’, Loktak, a large freshwater lake, has been under the scanner for the Loktak Multipurpose project. Also known as ‘the floating lake’, ‘phumdis’ or ‘phumshongs’ are home to fishermen. ‘Phumdis’ are essentially large floating heterogeneous mass of vegetation and soil. 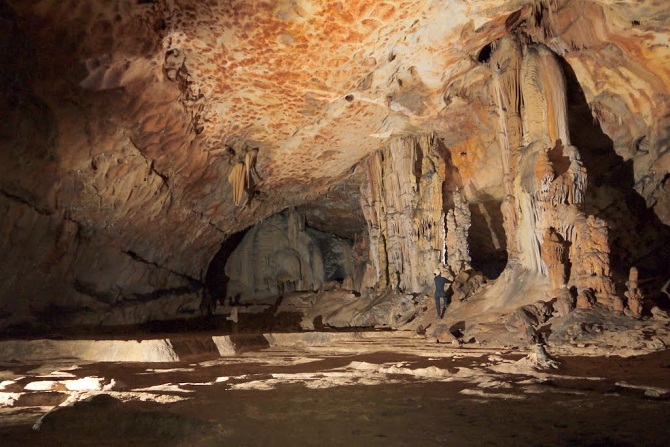 Rich of natural caves, Meghalaya boasts of having the longest cave in India. Waterfalls and stalactites decorate most of them. Located in Meghalaya’s Masynram and Nongjri, they are currently being investigated under the ‘Abode of the Clouds expedition’. 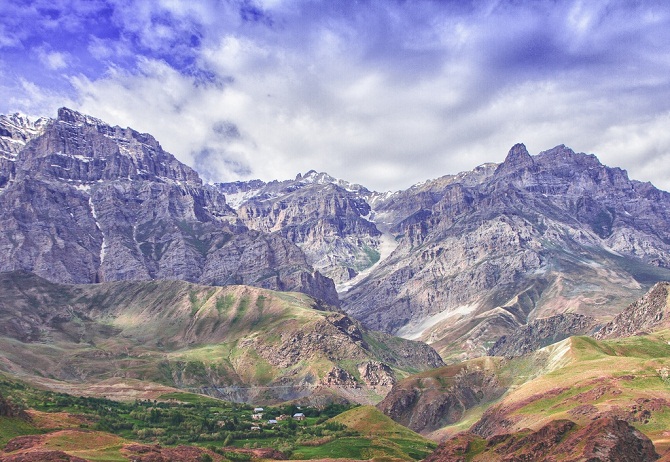 The ‘Gateway to Ladakh’, Dras is the coldest place in India. The valley starts at the Zojila pass and is a place which resounds with the echoes of the Kargil War. Winter’s snowy beauty can be witnessed here amongst the snow capped peaks and winding roads. 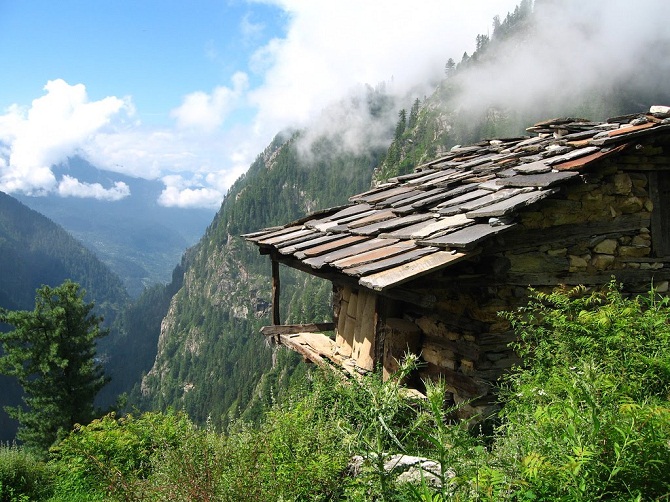 The first democracy in the world, Malana remained isolated for a long period of time before attempts to integrate the place into mainstream democracy started. Close to the famous Deotibba trek route, many documentaries have been shot to create awareness, especially regarding the systematic production of hashish.

Located in the Parvati Valley of Himachal Pradesh, the village nearby Kasol is a perfect retreat for tourists. A small waterfall ‘Kheer ganga’, the Parvati river, and the temple are a must visit. The trio are a perfect combination of various elements, an amalgamation of nature’s gifts and man made creations. 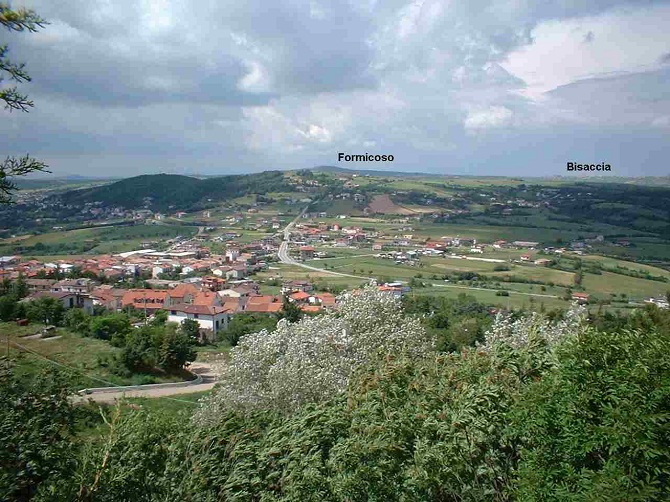 Famous for the ‘artist’s colony’ Andretta is the hub of theatre enthusiasts, painters and potters. Initially known as ‘Mem-da-pind’, the glazed pottery made here is sold at FabIndia stores in Delhi. Established by visionaries, this is the place where artists collaborate and perfect their skills. 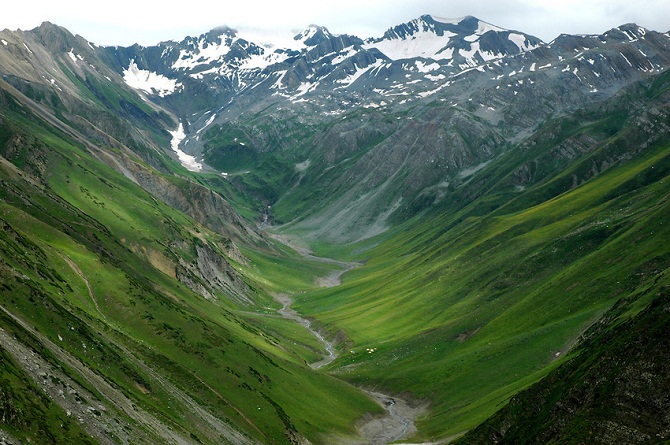 Touching the Kishanganga River, Gurais Valley is an important archeological site. Famous personalities such as Prez. F.D.R., J.L.Nehru, Indira Gandhi and Sheikh Abdullah have visited this valley prior to Kashmir’s partition. The legendary Habba Khatoon peak can also be viewed from here. The varying heights of the land filled with greenery are breathtaking. 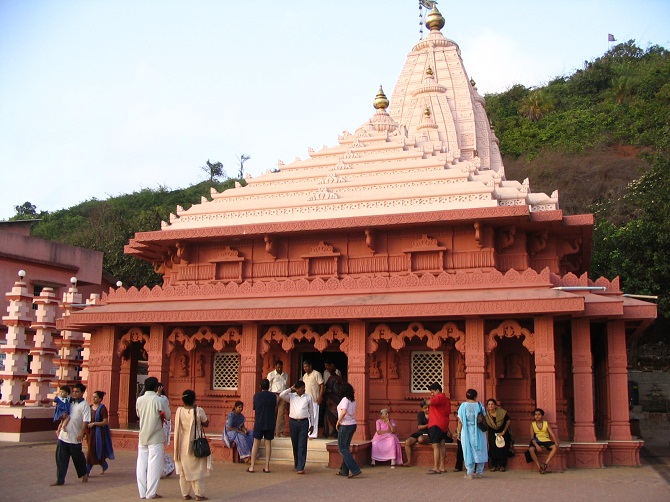 Situated on the coast of Maharashtra, several myths surround this pilgrimage spot. Known for the 400 year old Ganpati image residing in the temple, tourists come to revere the Paschim Devata. Sunrise viewed from the beach colors the landscape with gorgeous shades of red, orange and yellow alongside the blue of the serene sea. 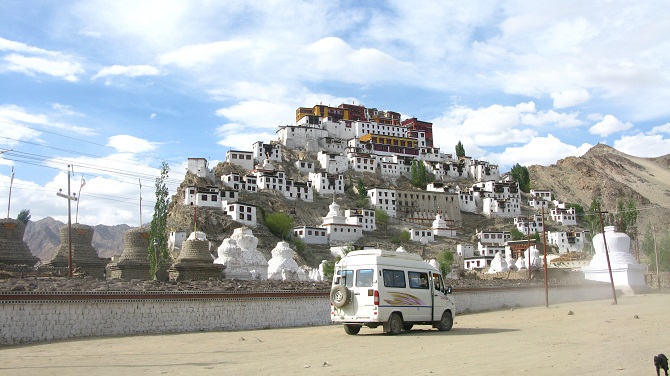 An ancient monastery set on top of the hill, the beauty of Ladakh can be seen via a bird’s eye view. The Hemis festival celebrated every 12 years, is a colorful display of an amalgamation of cultures. The perfect setting for the Ladakhi ‘Mask dances’, this festival reveals the splendor of India’s culture. 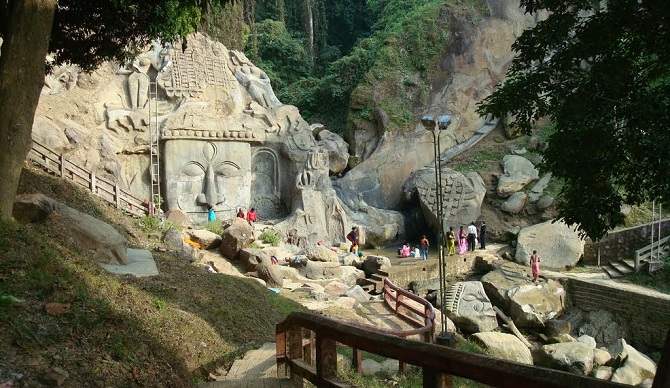 Home to gigantic rock cut images of the Hindu god Shiva, Unakoti is located in Tripura. Circling these rocks are mystical stories of their origin. They exist in two forms, i.e. rock carved figures and stone images. The Ashokaastami Mela is also held here each April. Unakoti can be loosely translated as ‘one less than a crore’ 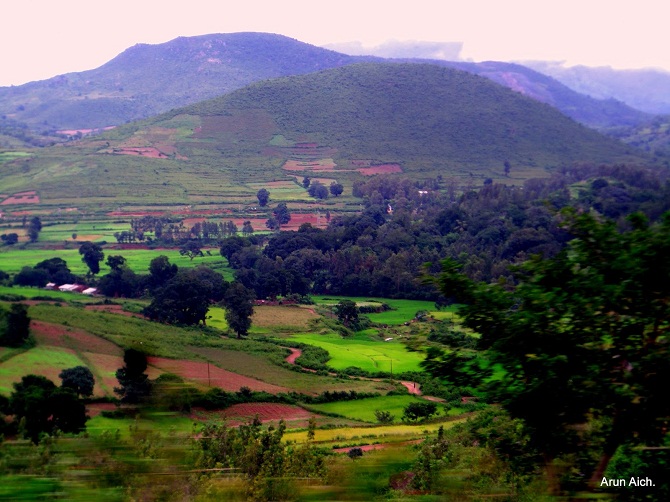 Lining the Eastern Ghats, near Vishakapatnam, Araku’s coffee is being sold globally. Lush orchards are spotted all over the greenery. Its beauty verges on surrealism due to the view of the picture perfect valley. A must visit site for some private meditation, a breath of the valley’s clean air will leave anyone refreshed and rejuvenated. 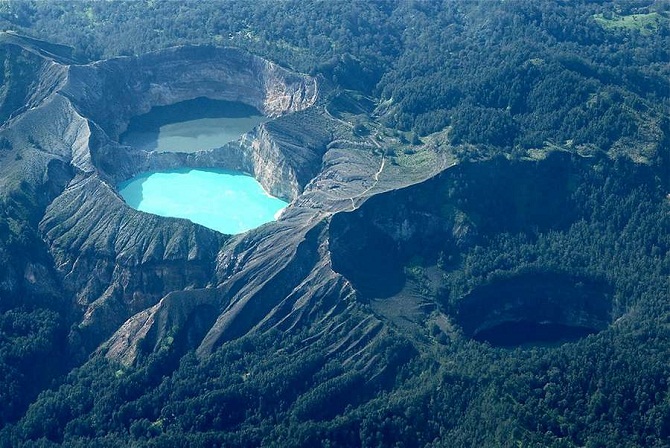 Caused by a meteor impact, this beautiful lake of Lonar, Maharashtra is surrounded by two temples- The Daitya Sudan temple and the Kamalja Devi Temple. Dubbed as a ‘prehistoric natural wonder’ by Lonely Planet, it is the world’s largest basaltic rock crater. This literal blast from the past has obliterated any traces of its impact, leaving only the silence and the serenity of the lake. 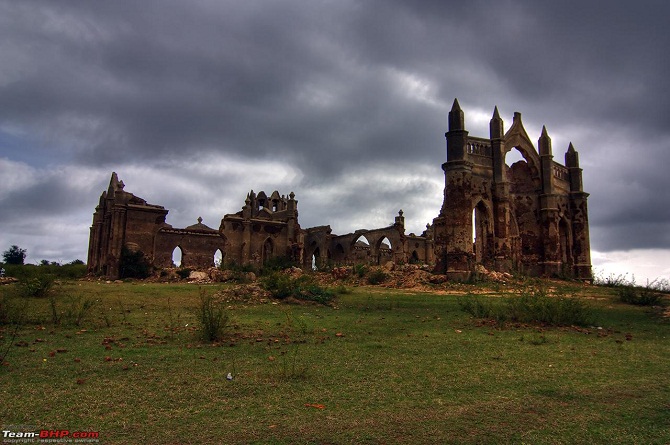 The Gorur dam built close to the church in Shettihalli, Karnataka floods it during monsoon – completely obliterating any traces of the French masterpiece. This broken down example of Gothic architecture, has a scenery reminiscent of a Hollywood film, complete with birds housing in the ruins.