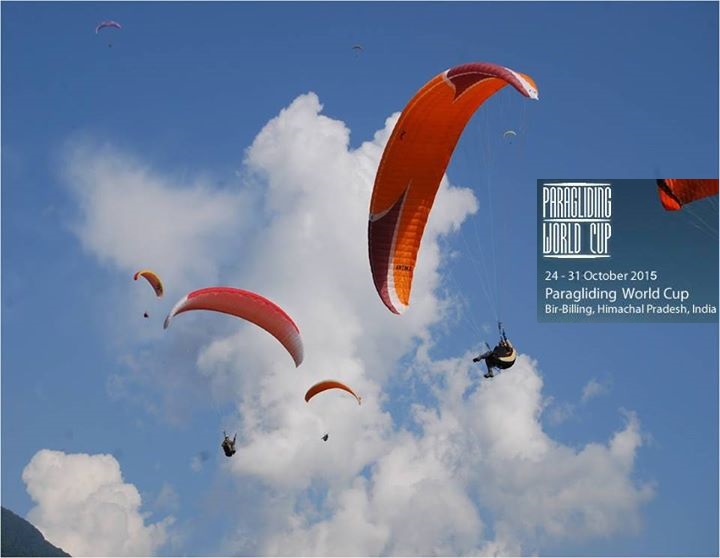 Paragliding has always been one of the most popular adventure activities across the globe as it provides individuals an opportunity to experience the freedom and thrill of roaming the vast skies. The fact that the Paragliding World Cup 2015 will be organized in the state of Himachal Pradesh in India is therefore a matter of great joy and event of countless gliding enthusiasts across the country. The picturesque venue of Bir Billing will host the event from October 23rd to October 31st, in which the best and most professional para-gliders from around the world will take part and show off their skills.  It is indeed a great achievement for the state of Himachal Pradesh as well as India as a country to be hosting an important adventure activity World Cup for the first time ever.

Since the ancient times, Human has been fascinated by the idea of flying and paragliding helps to fulfill this long cherished dream to a great extent. The activity requires the participants to undergo a basic training before they can soar across the skies with the help of their gliders. The sheer fun of getting a bird’s eye view of the objects on earth and having a greatly extended scope of vision is perhaps the biggest inspiration for the paragliders to take part in this adventure activity time and again. However, participants also need to make sure that they follow the set rules and guidelines to avoid any mishap and risk their lives during the adventure activity.

What Makes Bir Billing An Ideal Venue For The World Cup

Bir Billing is situated at a height of 2,290 metres in Kangra district, about 300 km from Shimla. The area is considered to be one of the best paragliding sites not only in India but across the world. Located in the Dhauladhar mountain range in the Kangra Valley of Himachal Pradesh, the region is not only known for its exquisite natural beauty but the various grounds and routes in the area that are perfect to enjoy different types of aero sport activities.

Every year countless adventure enthusiasts visit Bir Billing to not only take part in the annual paragliding competitions but also to enjoy the other fun and thrill activities that the region has to offer. The region also hosts the annual pre-world cup paragliding championship each year. It was the success of this event in 2014 that the Para-gliding World Cup Association in France chose Bir Billing as the venue for the event in 2015.

Some Basic Facts About Enjoying Paragliding In India At Bir Billing

Things To Keep In Mind

Gliders, who intend to be a part of the Bir Billing Paragliding World Cup need to bear the following facts in mind to ensure that they enjoy a memorable and enthralling trip.

a) Like most high altitude regions, Bir Billing is prone to sudden climatic changes, which why it is important for the gliders to carry the right equipment to guide them and keep them warm and safe.

b) Given the rush of visitors and participants that the region is expected to have during the World cup, it is highly advisable to make any bookings for accommodation well in advance to avoid any problems at the last minute.

c) Mobile connectivity is often extremely poor at such high altitude and even though satellite phones can be used to stay in touch with family and friends, it is important to get a proper license for using the same as otherwise it might lead to legal troubles.

d) In case of people suffering from any chronic disease or taking regular medication, it is advisable to seek the permission of the family doctor before undertaking the trip to avoid any health and wellness issues.

Preparations For The World Cup

Given the fact that India will be hosting the paragliding world cup for the first time, all the necessary measures are being taken to maintain the international standard of the championship. The state government of Himachal Pradesh has handled the responsibility of making the appropriate arrangements to the newly constituted Billing Paragliding Association (BPA) that works under the chairmanship of Sudhir Sharma, who is the state’s Urban Development Minister.

The work of developing the chosen sites for the event is going on at full speed, to ensure that they are able to meet the global standards for organizing such an event. More than 150  top ranked and round 500 free flying para- gliders expected to take part in the event. Already 40 foreign gliders and 10 Indian gliders have registered for the event and with the last date of registeration being 24th July, it is expected that the number of participants will be even more than expected.

The BPA is working in close coordination with the local government bodies to ensure that everything goes on in a smooth and incident free manner. Some of the steps that are being taken to ensure the same include putting a ban on any construction activities near the take-off and landing sites as well as initiating the process to seek permission for declaring the stretch from Mandi to Shahpur as a no- flying zone for the duration of the event.

Generating Awareness About The Event

It is a well known fact that for any event to be truly successful, the presence of an encouraging audience is as important as the presence of participants. Keeping this in mind, several steps are being taken by the concerned authorities to generate awareness about the World cup among the masses and inspiring them to attend the event in large numbers. In this respect, the use of online tools, primarily the social media channels has been given much significance. Not only has a Facebook page been created for the event, but an ad campaign has also been launched on You Tube. The video encourages   people to watch the Paragliding World Cup as it offers an entirely different experience from the popular sports of football and cricket. Given below is the link for this video which has been making rounds on the internet. The other link takes the paragliding enthusiast to the Facebook page of the vent where they can get all the latest news and information about the same.

Other Attractions During The World Cup

In order to ensure attract a greater number of people to attend the World Cup, the local administration and the BPA have planned a wide range of activities. These include an in air Arrow Show, hot air ballooning and live trekking. In addition the organizers are also focusing on promoting other adventure sports activities that people can enjoy in the region. These include, exploring the natural beauty of the region, camping, mountain climbing and other such activities.  In addition plans of holding a national championship in November, right after the World Cup event are also being considered by the organizers to ensure that people attend the event.

Given the risk factor involved in this adventure activity, the organizers are also paying much attention to the safety and rescue measures to be employed during the World Cup of Paragliding in Bir Billing. In fact the introduction of the facility of live-trekking has been done to ensure better safety of the gliders as well as to enhance the speed and efficiency of retrieving and rescuing stranded pilots. With most of the infrastructure already in place, the government of Himachal Pradesh is leaving no stone unturned to ensure that the World Cup is organized in a successful manner. The event will surely have great positive impact on boosting the sports and tourism activities in Himachal Pradesh and also enhancing the position of Bir Billing as an internationally renowned destination for enjoying various adventure activities.