A land from a fairy-tale in the Uttarakhand, Valley of Flowers trek is situated high in the Himalayas at an altitude of around 3650 meters above the sea level. Surrounded by the snowy mountains this valleys stays frozen during the winter months and with the advent of summer, the snow melts away and the valley is splashed with color. Hundreds of kinds of flower varieties in different color shades like the celebrated Cobra lily, the Brahmakamal, the blue poppy bloom. The locals earlier believed the valley to be inhabited by Fairies before it was chanced upon by a mountaineer Frank Smith in 1931. In 1982 it was declared a national park and is at present a UNESCO world heritage site. 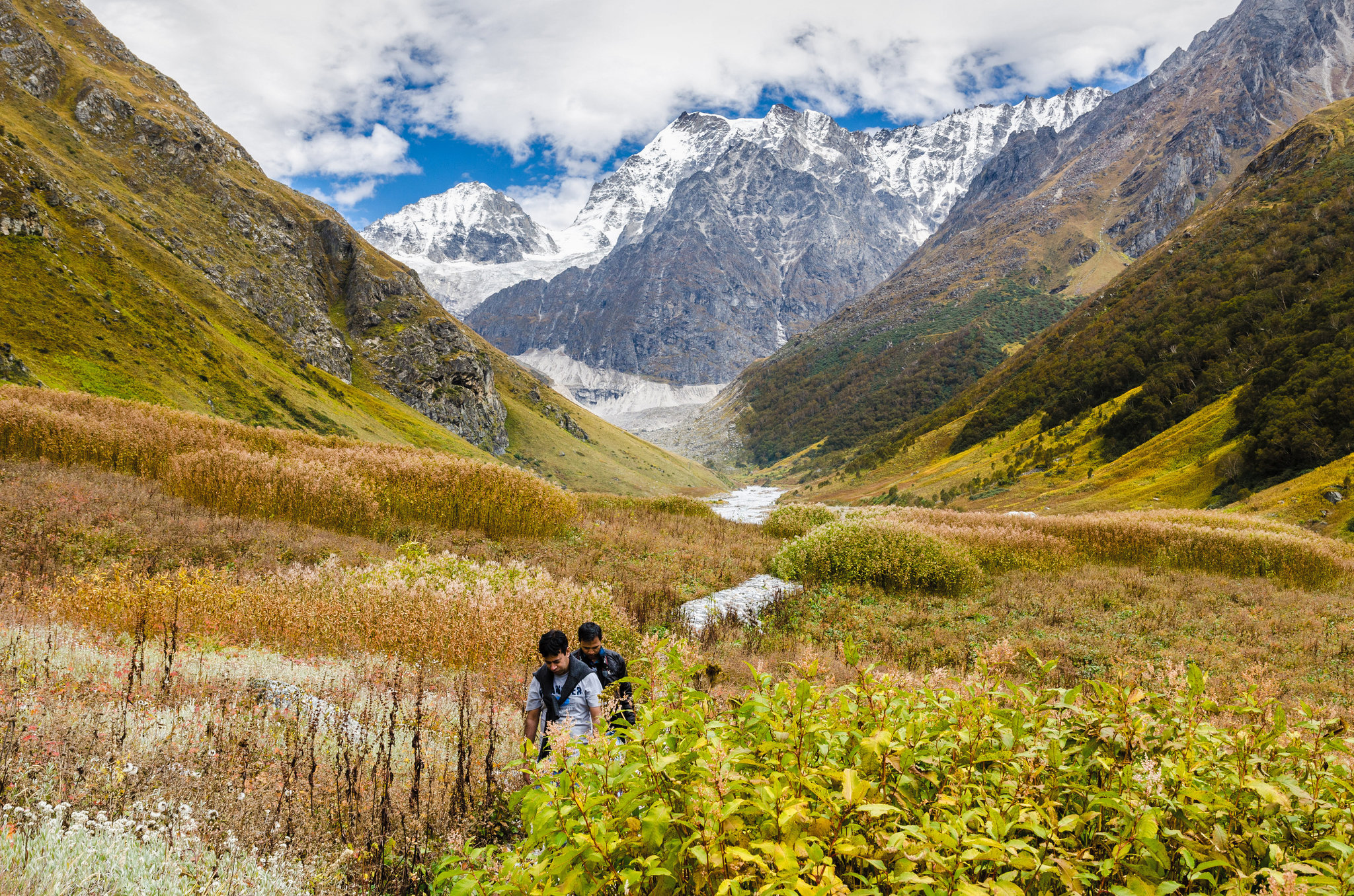 A Trek to the valley of flowers could take six days to a week and begins with reaching Rishikesh followed by a journey to Joshimath (11 hrs by bus) and then an hour’s journey to Govindghat. A 14Km difficult yet enjoyable trek along the Lakshman Ganga River takes the adventurer to Ghangria during which one can take in the picturesque beauty of the place and from Ganghria it is a 3Km climb to the Valley of Flowers. One is not allowed to stay there and is expected to return back the same day.

Best Places to Trek Near Bangalore Hemkund takes a different route to that of Valley of Flowers from Ghangria. The right side path from Ghangria follows a difficult and steep climb of five kilometers to reach Hemkund situated at an altitude of 4329 meters above sea level. Hemkund which literally translates to “Lake of Ice” is a lake situated at this altitude and remains frozen for almost eight months of the year true to its name. Hemkund Sahib, a Gurudwara and a Lakshman temple are located on the banks of the Lake and would quite easily make the highest places of worship in India. For the religious, it is considered to be the place where Guru Govind Singh meditated in his previous birth. The aquamarine lake surrounded by beautiful peaks has its own charm and has an abundance of the much famed Brahmakamal on its banks.

Quite popularly known as the lake of mystery, the Roopkund Lake is a magnificent tourist spot situated in the Himalayas at an altitude of 16,499 feet above the sea level. The place is totally uninhabited and the lake was apparently filled with skeletons and human bones due to a natural disaster to have occurred in the fourteenth century. The lake is located on route to the Nada Devi Cult; a pilgrimage site where Nanda Devi Raj Festival is conducted once is twelve years. The trek to the lake will take anywhere between seven and nine days and passes through virgin forests, galloping streams, religious sites, the Himalayan snow and peaks of Trisul and Bedni Bugyal. The trek starts from Lohajung and follows through a climb to a hillock and arrives at Ran ki Dhar and to Bhaguwagasa and finally to Roopkund. 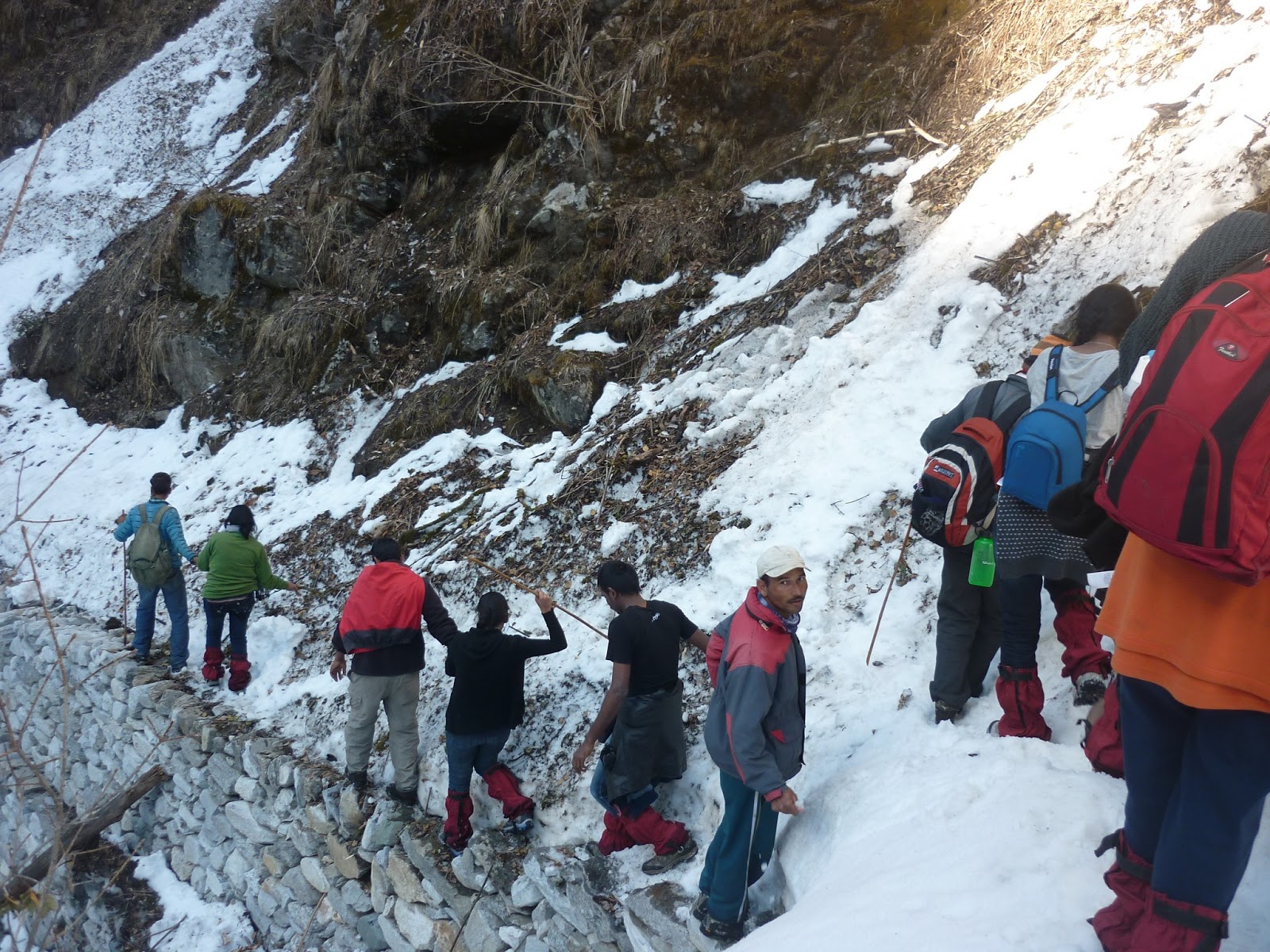 The Garhwal division of Uttarakhand offers excellent trekking opportunities to adventurers. One among them, located in the Uttarkashi district is the Dodital Lake which is the birth place of Ganesha and also has a temple devoted to the lord. The lake is picturesque surrounded by snow capped peaks and the tallest oak, rhododendron and deodar trees with beautiful golden trouts floating in the clear waters. A trek journey to Dodital can begin either from Uttarkashi, Hanuman Chatti or Kalyani and offers the trekkers a wonderful taste of trekking at higher elevations. The clear waters of the lake reflect the mighty peaks of Chaukambha and Neelkanth.

Chopta, adjudged the “Mini Switzerland” of the Garhwal Himalayas is a small village and the Chandrashila which is literally translated as “Moon Rock” together reaches an altitude of 4000 meters above sea level at the summit of Chandrashila. The trek which begins at Okhimath passes through the Deoria tal, reaches Chopta trek at an altitude of 2900 meters, then to Tungnath and finally the summit of Chandrashila and offers spectacular view of the Himalayas. From Chandrashila trek, the peaks of Chaukambha, Kedarnath, Nanda Devi and Trisul can be viewed. Tungnath is also famous for housing the highest temple of Lord Shiva.

Rupin pass trek, still uninhabited by humans is situated at 15, 250 feet above sea level and begins in Dhaula in Uttarakhand and ends in Sangla in Himachal Pradesh offering excellent trekking routes along the Rupin River. The route encompasses bubbling streams dug out between rocks, icy slopes, wooden bridges, glaciers and snow fields guided by the evergreen forests of Deodar.

Graded as a moderate trek, the Har Ki Dun trek follows an eight day trek to an altitude of 3566 meters enclosed with gleaming snow peaks and virgin green forests. A veritable haven for nature lovers and adventurers alike, the valley is rich in different flora and fauna varieties. It is also believed to be the place from where the Pandavas reached heaven. The rare trees of Bhojpatra and Brahmakamal are situated on route and have Jaundar and Swargarohini glaciers to the Southeast and the Bandar-Punch Mountain to the west.

It is one of the toughest treks in the region and consists of arduous trekking for 18 days. Situated at an altitude of 5450 meters, the trek begins from Gangotri and encompasses pine and birch trees along the way to the Nala Camp and then to the Rudra Gaira base, the Gangotri base camp and then the climb up to Auden Col base camp. The trek reaches the Khatling glacier and descend after the Masar and Vasuki tal and finally ends at Kedarnath.

Beyond Rafting And Yoga – The Saga Of Four Rishikesh-Himalayan Treks

Located at an altitude of 4912m, the trek is quite challenging takes 9days and is in the Gangotri region of the Garhwal Himalayas. The spectacular peaks of Bhirgupanth, Thalayasagar and the Jogin group peaks can be viewed during the trek and is home to mountain animals like blue sheep, the Himaalyan blue bear and Goral.

One of the easiest treks in the region, it is favorable for novices. Situated at an altitude of 4265m, the trek takes ten days and is famous for the Curzon trail which was first expedited by Lord Curzon. It is also famous for the magnificent views of Nanda Devi, Haathi-Godi Parvat, Kedarnath, Neelkanth, Chaukambha, Kamet, Gauri Parvat and Bithartoli.

One thought on “Top 10 Treks in Uttarakhand”